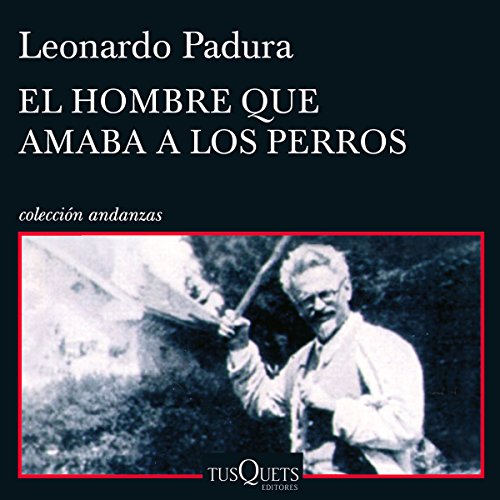 Karen McCartney
5,0 de 5 estrellas El hombre que amaba a los perros (Leon Trotsky and his assassin Ramón Mercader)
Revisado en Reino Unido el 28 de marzo de 2012
Compra verificada
El hombre que amaba a los perros (Leonardo Padura) is a novel of astonishing breadth and depth and a testament to years of detailed research. The major historical developments of the 20th century, the rise of Stalin, the outbreak of the Spanish civil war and the politics of the Second World War are skilfully interwoven with the destinies of its two key figures: Leon Trotsky and his assassin, Ramón Mercader. From the perspective of each of these men Padura immerses the reader in the complex political dynamics and contradictions of their times in a narrative of just over 750 pages that is rarely less than fascinating.
Yet this book is as much a detailed study of the psyche of a condemned man and his executioner as it is a political-historical novel. Padura takes us right into the minds of Trotsky and Mercader as their respective lives inch forward to the moment when the ice pick is brought down. This moment is the carefully crafted culmination of a personal dialectic of decisions and doubts, which reveals both men to be at once authors of their destiny was well as puppets responding to larger forces. This is where the pathos of the novel lies, in the sense of inevitability, of doomed lives.
While it is true that El hombre que amaba a los perros is very much a "chronicle of death foretold" in that we are familiar with the ending, the author manages to build and sustain suspense around not what eventually happened, but how it happened. This is where the novel excels, in its detailed portrayal of the events leading up to the moment of the assassination in Mexico. The account of the weeks, days and hours prior to Trotsky's death at the hands of Mercader is nail-bitingly tense at times, to the extent that the reader is fearful of turning the page yet compelled to do so by the power of the narrative.
The compulsion is maintained even after Trotsky's death. Questions as to Mercader's final destiny must be answered and drive the reader on a further hundred pages. There is curiosity too about Iván, the fictitious Cuban narrator of the novel who develops an acquaintance with Mercader during a series of encounters on a beach outside Havana, in the years before the assassin's demise. Like Trotsky and Mercader, he too meets his death. Iván's end is symbolic, in a ruined house, in a ruined city (Havana) and amidst ruined dreams. Unlike Trotsky and Mercader, he is the true, blameless victim of El hombre que amaba a los perros.
At times the author has a tendency, which is not always appropriate, to use the narrative to indulge his deep anger at totalitarian regimes. Padura has more than a few grudges against authoritarian rule, most of them born out of first hand experience in his home country, Cuba. In the final pages he makes a plea on behalf of the tragic victims of history, manipulated by "superior forces", condemning Trotsky and those like him, whose fanaticism brought about what he calls a "perverted utopia." This is the real tragedy, the wasted historical opportunities to build a more just society and the countless lives sacrificed for perverted ideals.
El hombre que amaba a los perros is a novel that I highly recommend for anyone with an interest in history and history-making figures.
Leer más
A 2 personas les ha parecido esto útil
Informar de un abuso
Traducir reseña a Español

John Murray
5,0 de 5 estrellas The Death of Trotsky
Revisado en Reino Unido el 7 de marzo de 2014
Compra verificada
An excellent and informative book both about Trotsky himself - I had never realised what a towering figure he had been - but also about the Spanish Civil War. The depiction of life in Cuba is most informative and should be read by all those who believe that the Cubans are happy in their socialist paradise.

The writer's style is gripping (in Spanish at least, I have not read it in translation) probably as a result of his being primarily a crime writer.

I would recommend this book to anyone interested in the history of the Soviet Union and the Spanish Civil War, as it penetrates the real intentions of the communists and what truly happened in Barcelona, as George Orwell sought to explain. It explains a lot of the current thinking in Europe and how it was shaped by these events
Leer más
A una persona le ha parecido esto útil
Informar de un abuso
Traducir reseña a Español

Georgia P.
5,0 de 5 estrellas Highly recommended
Revisado en Reino Unido el 4 de febrero de 2016
Compra verificada
If you like historical novels and are interested in the history of communism in the URSS during the Stalin era in particular, this book will make you happy.
Leer más
Informar de un abuso
Traducir reseña a Español