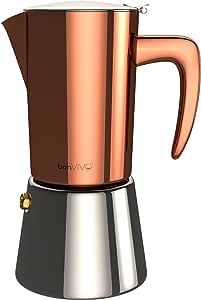 Justin Credible
5,0 de 5 estrellas Safe choice - update: very good choice
Revisado en Reino Unido el 3 de mayo de 2018
Color: CobreTamaño: 6 tazasCompra verificada
After 18 months I'm giving this pot an extra half star, purely because I've learned how to use it to make a really good cup of coffee. Still not as kosher an espresso as the best (and most expensive) machines can deliver, but as good as any mocha pot IMO. And never a failure (in contrast wo Bialettis and inferior copies).
It does take some weeks of use for the faint taste of metal to completely go away, and from that point you have the potential to make flavoursome coffee. The method? It's a labour of love, but worth it.
- Choose your beans from a selection of the highest quality you can afford. This is the single most important factor in making your perfect coffee every time.
- Grind the beans fresh every time, using as good a grinder as you can afford (I use a Eureka Mignon).
- First grind at medium until you've got a thin cover of grounds at the bottom of the filter, then top up with a fine, but not finest, grind size your grinder will do (on the Mignon size 1 works well, though I finish with a short burst at 3 because otherwise the burrs can clog up).
- Don't fill right up to the max, leave a slight gap.
- Heat the water on a medium hob, keep an eye on it, and turn the heat down a notch or two as soon as you hear or see liquid arriving in the upper chamber, so the liquid is produced slowly to extract maximum flavour from the grounds.
- Remove the pot from the heat as soon as you hear full-on bubbling - prolonged heat will generate steam which overheats the grounds and produce a sour and cloudy brew.
- Give the pot half a minute to settle before pouring.
Happy days.

Original review May 18:
Took a bit of a punt on this moka pot, but quite pleased.
The practical design and quality finish redeem the quirky looks (which I get, though my wife does not).
While the base is bombproof heavy-guage stainless steel, the upper chamber and lid feel flimsy in comparison. Though no dents incurred yet, and the low C of G makes for easy handling.
Does the Inteca make good coffee? Yes, depending on your yardstick.
In its favour, this pot makes a consistent brew and never fails to deliver (some similar pots have off-days).
Just don't expect a true Espresso. For that, fresh-grinding good quality beans in a good quality grinder is a minimum requirement - even so, with the Inteca the flavour of the brew doesn't go deep enough and there's no crema on top. Not to worry, that's par for a moka pot, and it's a good deal closer than any cafetiere can manage.
For this type of coffee maker the benchmark has to be Bialetti, who patented the first moka-pot design in 1933. In my experience the aluminium Bialetti is capable of delivering a better brew than the Inteca or any other stainless steel pot including Bialetti's own. Perhaps it's down to the metal, or rather the Al2O3 coating inside the Bialetti, perhaps to the chamber/ filter design, but the original Bialetti somehow extracts more flavour from the bean and yelds a more satisfying drink.
The Inteca though can be used on an induction hob, and for me that was the clincher.
Leer más
A 32 personas les ha parecido esto útil
Informar de un abuso
Traducir reseña a Español
Ver todas las reseñas
Amazon Prime: envíos rápidos, GRATIS e ilimitados y mucho más
Los clientes de Amazon Prime disfrutan de Envío en 1 día GRATIS en dos millones de productos y Envío en 2 o 3 días en millones de productos más, Acceso a series y películas en Prime Video, incluyendo las series Amazon Originals, más de 2 millones de canciones y cientos de listas de reproducción sin publicidad con Prime Music, cientos de eBooks en Prime Reading, Acceso Prioritario a las Ofertas flash y Almacenamiento de fotos gratis e ilimitado en Amazon Drive.
> Más información