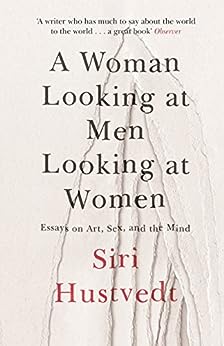 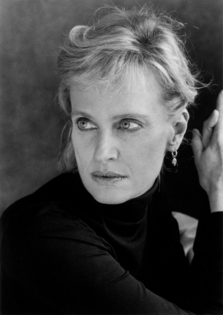 A Woman Looking at Men Looking at Women: Essays on Art, Sex, and the Mind (English Edition) Versión Kindle

A compelling and radical collection of essays on art, feminism, neuroscience, psychology, and philosophy from prize-winning novelist Siri Hustvedt, the acclaimed author of "The Blazing World" and "What I Loved."
Siri Husvedt has always been fascinated by biology and how human perception works. She is a lover of art, the humanities, and the sciences. She is a novelist and a feminist. Her lively, lucid essays in "A Woman Looking at Men Looking at Women "begin to make some sense of those plural perspectives.
Divided into three parts, the first section, A Woman Looking at Men Looking at Women, investigates the perceptual and gender biases that affect how we judge art, literature, and the world in general. Among the legendary figures considered are Picasso, De Kooning, Jeff Koons, Louise Bourgeoisie, Anselm Kiefer, Susan Sontag, Robert Mapplethorpe, the Guerrilla Girls, and Karl Ove Knausgaard.
The second part, The Delusions of Certainty, is about the age-old mind/body problem that has haunted Western philosophy since the Greeks. Hustvedt explains the relationship between the mental and the physical realms, showing what lies beyond the argument desire, belief, and the imagination.
The final section, What Are We? Lectures on the Human Condition, discusses neurological disorders and the mysteries of hysteria. Drawing on research in sociology, neurobiology, history, genetics, statistics, psychology, and psychiatry, this section also contains a profound and powerful consideration of suicide.
There has been much talk about building a beautiful bridge across the chasm that separates the sciences and the humanities. At the moment, we have only a wobbly walkway, but Hustvedt is encouraged by the travelers making their way across it in both directions. "A Woman Looking at Men Looking at Women" is an insightful account of the journeys back and forth." --Este texto se refiere a la edición kindle_edition .

This is a phenomenal book. Its soul is in the connections it draws between disparate subjects, through which Hustvedt manages to shrink the world into something comprehensible. -- Claire Kohda Hazelton ― Guardian

A writer with an unusual blend of incisive intelligence, humour and imagination. There is a moving essay on the blurring of gender in Louise Bourgeois and a brilliantly comic analysis of Karl Ove Knausgaard . . . She is able to combine [a] personal perspective with erudite analysis and, as the personal perspective is at the forefront, she is always open to uncertainty, which she sees, rightly, as itself a political stance . . . as the complicated warnings of experts are decried and swaggering lies broadcast on the news, this kind of uncertainty matters more than ever . . . We are fortunate to have Hustvedt voicing doubt so intelligently. -- Lara Feigel ― Financial Times

It is obvious that hers is a great mind that is constantly exploring, searching, "becoming" . . . An impressive collection by a novelist who clearly loves the humanities, the sciences and the ancient art of storytelling. But Hustvedt is not only a writer. She is also a passionate reader and therein lies the secret of this book . . . Here is a great book that invites reading . . . not only to 'look at a woman writer looking at men looking at women', but also to look within, deep inside the recesses of our minds, so as to recognise the fascinating complexity but also the heartbreaking fragility of human existence. -- Elif Shafak ― Observer

[The Delusions of Certainty] reads like the work of a talented teacher who has the drive and the ability to organise and present - in an exceptionally clear, clean, even limpid voice - a monumental amount of abstract information. It's hard to overstate the pleasure and the comfort that such demystification provides the scientifically uninitiated; it does indeed make the world feel larger, more expansive, more alive to the touch ― New York Times Book Review

Few writers eviscerate bias and flawed logic as elegantly and ruthlessly as Hustvedt . . . she expertly flays assertions about biological and psychological sex differences . . . Hustvedt does not resolve her many questions, but her exhilarating conclusion testifies to the virtues of doubt . . . Her work is cerebral but also warm, deeply felt. ― Washington Post

[Hustvedt] impresses as a writer of blazing intelligence and curiosity . . . This is fertile and fascinating territory for scientists and humanists alike. ― Prospect --Este texto se refiere a la edición paperback.

﻿Internationally acclaimed as a novelist, Siri Hustvedt is also highly regarded as a writer of non-fiction whose insights are drawn from her broad knowledge in the arts, humanities, and sciences. In this trilogy of works collected in a single volume, Hustvedt brings a feminist, interdisciplinary perspective to a range of subjects. Louise Bourgeois, Pablo Picasso, Susan Sontag and Knut Ove Knausgaard are among those who come under her scrutiny. In the book's central essay, she explores the intractable mind-body problem and in the third section, reflects on the mysteries of hysteria, synesthesia, memory, perception, and the philosophy of Søren Kierkegaard. With clarity, wit, and passion, she exposes gender bias, upends received ideas, and challenges her reader to think again.
--Este texto se refiere a la edición paperback.

Siri Hustvedt's first novel, The Blindfold, was published by Sceptre in 1993. Since then she has published The Enchantment of Lily Dahl, What I Loved, The Sorrows of an American, The Summer Without Men and The Blazing World, which was longlisted for the Man Booker Prize in 2014 and won the Los Angeles Times Book Prize for Fiction. She is also the author of the poetry collection Reading To You, and four collections of essays -Yonder, Mysteries of the Rectangle: Essays on Painting, A Plea for Eros and Living, Thinking, Looking, as well as the memoir The Shaking Woman or A History of My Nerves.

Born in Minnesota, Siri Hustvedt now lives in Brooklyn, New York. She has a PhD in English from Columbia University and in 2012 was awarded the International Gabarron Prize for Thought and Humanities.
She delivered the Schelling Lecture in Aesthetics in Munich in 2010, the Freud Lecture in Vienna in 2011 and the opening keynote at the conference to mark Kierkegaard's 200th anniversary in Copenhagen in 2013, while her latest honorary doctorate is from the University of Gutenburg in Germany. She is also Lecturer in Psychiatry at Weill Cornell Medical College and has written on art for the New York Times, the Daily Telegraph and several exhibition catalogues.

Daniel Marc Reicher
5,0 de 5 estrellas Highly recommended for all interested in the mind brain issue.
Revisado en Canadá el 30 de abril de 2017
Compra verificada
A series of long essays, the most interesting for me was the one dealing with the so called brain mind issue.

This part is over 200 pages long and is quite accurate in depicting writers of the far past and the present on this issue.

However there is no index at the end of the book so I had to flick through all two hundred plus pages to see that there was no mention of Julian Jaynes and his theory of the origin of consciousness in the breakdown of the bicameral mind.

This reference would have added valuable information to how human consciousness might have evolved in pre historic times leading to a belief in an external source of speech eventually attributed to God.

The author disagrees with the Cartesian or dualistic model and wisely is more holistic in her approach.

Well written and dense with insight this is the kind of book I first check out of the library but then soon after realize it is good enough to actually purchase here online. I got the book delivered to my door for next day shipping at no extra charge due to the prime subscription.

Thank you Siri Hustvedt for making this series of intelligent essays available in one volume.

C. O'Brien
4,0 de 5 estrellas Tough going for the non-specialist
Revisado en Reino Unido el 2 de febrero de 2017
Opinión de cliente de Vine de producto gratis( ¿Qué es esto? )
I've enjoyed a couple of Siri Hustvedt's novels, so I was intrigued by this collection of essays on "art, sex and the mind". I enjoy such books, and I'm an arts graduate myself, but I wasn't, if I'm honest, quite prepared for how rigorous and academic a read this would be. I was expecting something along the lines of Camille Paglia's "Sexual Personae" or "Sex, Art and American Culture", both of which I read and enjoyed. Although there's a lot of cross-genre consideration of art history and practice - a nicely unusual essay comparing Mapplethorpe and Almodovar comes pretty early on - this enormous collection is less about gender studies than it is about neuroscience, psychology and philosophy. The writing is dense, complex and abundantly referenced. For the non-scientist, it's tough going.

One essay I did particularly enjoy was the more personal "Much Ado About Hairdos", which starts with an affectionate recollection of braiding her daughter's hair for school, and moves on to a consideration of hairstyle as social signifier and its role in myth and fairytale. It rather recalls Roland Barthes' look at Hollywood's reimagination of Roman hair in "Mythologies", though it's neither as humorous nor as entertaining. She takes "Balloon Dog" by contemporary artist Jeff Koons as a jumping-off point for a meditation on the value (financial v personal) of fine art and there were some interesting insights into writing as therapy in "The Writing Self And The Psychiatric Patient", born out of a stint as a hospital volunteer teaching creative writing.

For the most part, though, this is a book I'll probably explore more fully in time - its complex essays and lectures are better appreciated one at a time rather than right through from cover to cover. Although I haven't got round to reading it yet, I hear the section on Kierkegaard is fantastic!
Leer más
A 8 personas les ha parecido esto útil
Informar de un abuso
Traducir reseña a Español
Ver todas las reseñas
Volver arriba
Conócenos
Gana dinero con nosotros
Métodos de pago Amazon
¿Necesitas ayuda?
© 1996-2021, Amazon.com, Inc. o afiliados. Todos los derechos reservados.