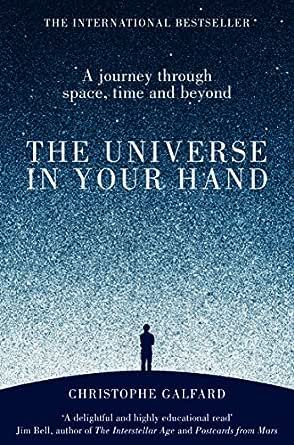 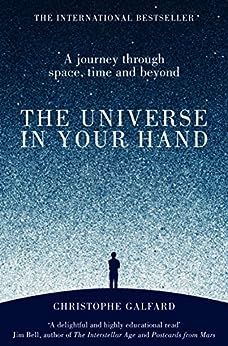 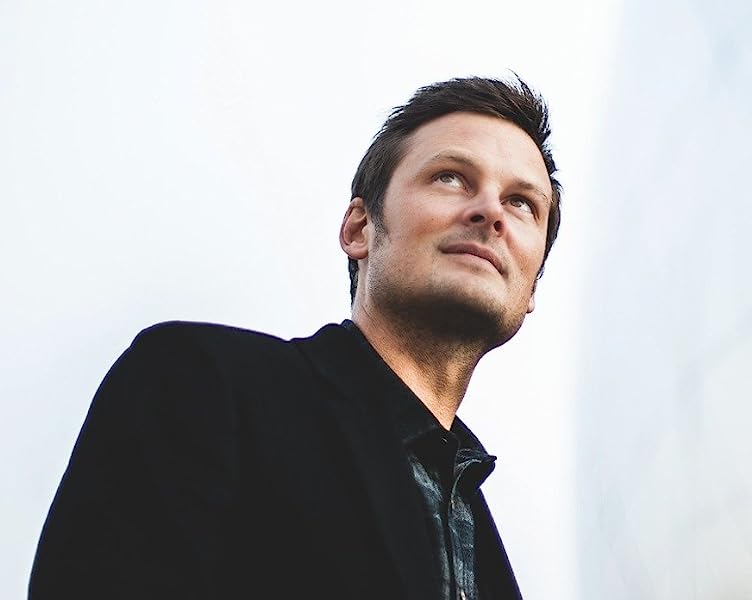 The Universe in Your Hand: A Journey Through Space, Time and Beyond (English Edition) Versión Kindle

Imagine if The Hitchhiker's Guide to the Galaxy were a real, practical book about the mysteries of the universe...

The Universe In Your Hand takes us on a wonder-filled journey to the surface of our dying Sun, shrinks us to the size of an atom and puts us in the deathly grip of distant Black Holes. Along the way you might come to understand, really understand, the mind-bending science that underpins modern life, from Quantum Mechanics to Einstein's theory of General Relativity.

Through brilliant storytelling and humour rather than headache-inducing graphs and equations, internationally renowned astrophysicist Christophe Galfard has written an instant classic that brings the astonishing beauty of the universe to life - and takes us deep into questions about the beginning of time and the future of humanity.

With its breezy conversational style, The Universe in Your Hand is well suited for the general reader with little to no prior knowledge of science... The reader will come away from [The Universe in Your Hand] with a deeper understanding of how modern physics has brought us closer to an ultimate understanding of reality.
- The New York Times Book Review

If Ms. Frizzle were a physics student of Stephen Hawking, she might have written THE UNIVERSE IN YOUR HAND, a wild tour through the reaches of time and space, from the interior of a proton to the Big Bang to the rough suburbs of a black hole. It's friendly, excitable, erudite, and cosmic.
--Jordan Ellenberg, New York Times besteselling author of How Not To Be Wrong

A useful book for readers to visualize the complex ideas of modern physics.
--Kirkus Reviews "Entertaining and comprehensive... The deft and dazzling imagery makes difficult concepts accessible, streamlining the progression through topics and fulfilling Galfard's promise to 'not leave any readers behind.'... Readers looking to expand their knowledge of physics and cosmology will find everything they need here."
--Publishers Weekly, Starred Review Galfard dispenses with mathematical formulas in this foray into modern physics, making a lively imagination the only portal necessary for general readers hungry for the intellectual excitement of astral and atomic exploration. In a series of mind-stretching thought experiments readers plunge into the hydrogen atom in a water molecule, there to contemplate the quantum fields that sustain all matter, then shoot out beyond supernovas to ponder the strangely opaque boundary of space-time... these probes into the universe will thrill readers but rarely perplex them... Galfard leaves exhilarated readers eager to share in the forthcoming discoveries.
--Booklist, Starred Review How can we ever hope to fully grasp the infinite complexities of space and time, or even the very nature of reality itself? Thankfully, Christophe Galfard shows us the way, through a well-written and thoroughly approachable journey through what we know of modern astronomy and physics. Part personal conversation, part travelogue, and part science primer for the non-scientist, The Universe in Your Hand is a delightful and highly educational read.
--Jim Bell, author of The Interstellar Age and Postcards from Mars The Universe in Your Hand is a masterpiece of popular science writing."
--Shelf Awareness, Starred Review --Este texto se refiere a la edición paperback.

Imagine if The Hitchhiker's Guide to the Galaxy were a real handbook . . .

Internationally renowned physicist and bestselling author Christophe Galfard takes us on a wonder-filled journey through the past, present and future of the universe - all from the comfort of a sofa.

The Universe in Your Hand explores some of the most profound and amazing ideas of our times - Quantum Mechanics, General Relativity, Time Travel, Parallel Realities and Multiple Universes - with the promise that you'll only need one equation: the fabled E=mc2. Christophe Galfard, who studied black holes and the origins of our universe as Stephen Hawking's research graduate student, tells a narrative story of the power of our incredible universe to transport us to the surface of our dying Sun, put us into the deathly grip of a black hole and shrink us to sub-atomic size in order to probe the minute world of particles and quantum forces.

Written from the cutting edge of today's knowledge, The Universe in Your Hand allows readers to really understand the mind-bending mysteries that underpin modern science, and, along the way, questions our place within the universe and the beginnings of time.

The Universe in Your Hand is the perfect primer for anyone curious about our extraordinary universe.

'A well-written and thoroughly approachable journey through what we know of modern astronomy and physics. Part personal conversation, part travelogue and part science primer for the non-scientist, The Universe in Your Hand is a delightful and highly educational read'
Jim Bell, author of The Interstellar Age and Postcards from Mars

'A wild tour through the reaches of time and space, from the interior of a proton to the Big Bang to the rough suburbs of a black hole. It's friendly, excitable, erudite and cosmic'
Jordan Ellenberg, New York Times bestselling author of How Not to Be Wrong

CHRISTOPHE GALFARD holds a PhD. in theoretical physics from Cambridge University. He is coauthor with Stephen Hawking and his daughter on their first YA book, George's Secret Key to the Universe. In the past few years, he has given talks, and written a live show, about our universe attended by more than 130,000 people, of all ages and education background. --Este texto se refiere a la edición paperback.
Leer más

Carlos Vivanco Pastore
5,0 de 5 estrellas A real true de force
Revisado en España el 2 de octubre de 2016
Compra verificada
I have truly enjoyed this book. It provides the most up-to-date information we have regarding the Universe, its origin and beyond. Mr Galfard has the skills to communicate very complicated and difficult concepts with very simple examples.

Although I had a hard time to fully comprehend the world of quantum's concepts and properties it didn't stop me from continuing this fascinating book. If you are interested to have a better understanding or simply remembering things which we learnt in the past this book is a must-to-read.

Jonas
5,0 de 5 estrellas Very interesting!
Revisado en España el 22 de abril de 2020
Compra verificada
Although I did learn a bit about the universe and physics when I went to secundary (highschool), most of it was already long forgotten.
This book is very interesting for people who want to take their first steps in learning about the universe and physics. The content is not always very easy, but it does not make it any less interesting. Thanks to this book, physics and the universe have piqued my interest and I'm already looking for a follow up book with more in-depth information to learn.

Ricardo Bencomo
5,0 de 5 estrellas Wow! I am hooked
Revisado en España el 10 de noviembre de 2016
Compra verificada
Ist a wonderful book that makes you understand how incredibly immense is our curiosity about what lies beyond the stars and our need to explore what surround us in space. The narrative is so nice, the author takes you by the hand in a fictional journey between stars, galaxies, planets, etc. In all, I think it's a must for anyone who is not an expert on the topic but has a insaciable curiosity about space.
Leer más
A 2 personas les ha parecido esto útil
Útil
Comentar Informar de un abuso
Traducir reseña a Español

KMR
5,0 de 5 estrellas Read it!
Revisado en Reino Unido el 2 de octubre de 2017
Compra verificada
I'm only 3/4 of the way through but this book is blowing my mind. I'm new to this subject and just starting to step back into the world of physics since my GCSE days (a long time ago). I tried some of the other 'introductory' books but I think they still assume a certain level of understanding. This really is a step by step guide, taking you on a journey through one of the most exciting subjects there is. I'm so glad I found this book because it's opened up a whole new interest for me. This being said, I think somebody with a more extensive knowledge would also enjoy it - my father in law has read Hawkings etc but has his own copy of this and has found it 'a joy' (his words), I think Galfard's writing style is so enjoyable and accessible that anyone would find this captivating.
I would highly, highly recommend. Especially if you are just taking your first tentative steps into these ideas and concepts.

Neogoonhead
5,0 de 5 estrellas A triumph of communication, entertaining, enlightening, jaw dropping!
Revisado en Reino Unido el 1 de febrero de 2019
Compra verificada
The subject matter is immense, the ideas and proven facts are mind bending! All the way I kept thinking, can this be, it doesn't make sense! But there it is, common sense is of little use on these scales.
The quality of this work is exceptional, clear, focused and light.
Probably one of the most important books I've ever read. Don't miss it,if you grasp 10% of it, it will change your perspective.

JRF
4,0 de 5 estrellas Unusual style that works well
Revisado en Reino Unido el 23 de octubre de 2018
Compra verificada
This book is aimed squarely at the layman, and presupposes little or no knowledge of cosmology. As such, it does not (and makes no claim to) go into the subject in any depth. However, the accessible and interesting writing style means that those with knowledge of the area already should also gain new insights, or at least see things from a slightly different perspective.

I bought this as a Kindle Daily Special, at which knock-down price (99p) it can be heartily recommended to all.
Leer más
A 3 personas les ha parecido esto útil
Informar de un abuso
Traducir reseña a Español