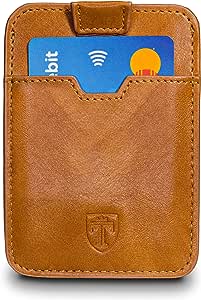 Renton
5,0 de 5 estrellas Finally, a 'slim' wallet which doesn't make the owner do the slimming...
Revisado en Reino Unido el 10 de septiembre de 2019
Color: Negro Con EmblemaCompra verificada
If you're in the market for a new wallet, you'll know there are something in the region of a bajillion options. And if, like me, you're in the market because your bulky old bifold is hogging all of your valuable pocket space, you'll know that most of this virtually-infinite selection tend to boast the 'slim' label. In my wallet-researching travels, however, I've discovered that even the best slim wallets are usually pulling a fairly obvious con - They do indeed reduce the amount of real estate they take up in your pocket, but only by forcing you to reduce the amount you carry in the first place. After the agonising process of selecting which five or so cards are most vital for everyday carry, you'll be delighted by how compact most of these clever wallets are...But only until you realise your embarrassingly pudgy bifold would be equally skinny with the same limited load.

Enter the Travando Minimalist Credit Card holder: a slim wallet that actually holds a reasonable amount of cards. No more will you have to banish that Nectar card to a dusty drawer or get to the coffee shop and realise your loyalty card didn't make the final cut. I've got ten cards in mine without it showing any strain whatsoever, despite only being about 20% bigger than a credit card.

Having tried some trigger-activated card holders, my kid-on-Christmas-Day glee at ejecting my cards with the flick of a switch quickly wore off when I realised I couldn't carry notes without a money clip (which, aside from adding bulk, helpfully advertises how much you're carrying every time you take it out). Therefore the pockets on either side of this wallet, which can be used for extra cards, cash, receipts or other random bits of paper, are welcome - Though cards should ideally be put in before filling the central holder as it's a bit of a squeeze otherwise. One advantage to trigger ejection mechanisms is that they fan your cards out, whereas the ribbon pull-tab mechanism of this wallet ejects the contents in a block, leaving you to pick through to find the one you need. It's easy enough to fan them out yourself when only carrying a few cards, but I can still see it being a pain if you're in a hurry. Though at least you can keep your most-used card in the outside pocket for ease.

I haven't owned it long enough to speak to durability or RFID-blocking, but it feels solidly constructed while also being soft and supple - Combined with its ridiculously tiny size, it's exceedingly comfortable to carry. So if you're looking for a slim wallet that won't require you to abandon half of the cards you currently carry....This may be the one for you!
Leer más
A 4 personas les ha parecido esto útil
Informar de un abuso
Traducir reseña a Español

Andreas Patsalos
5,0 de 5 estrellas Perfect
Revisado en Reino Unido el 5 de diciembre de 2018
Color: Negro Con EmblemaCompra verificada
Writing this review after a month of use. Totally satisfied with it. Unlike my old bulky wallet that looked like a rock in my jeans pocket, this one you put it in your pocket and you forget that it’s in there. Jeans pocket, jacket pocket, back pocket, wife’s bag, anywhere. Mine holds six cards at the moment and there’s plenty of room for more. Quality is top notch as well, stitches are hanging on well and the leather still looks and feels brand new, unlike my old wallet again which its leather started wearing out in a week or so. Also, something else I like is that the mechanism that pushes the cards up can’t break, because simply it’s just a piece of cloth that goes underneath them and pushes them up when you pull it.

As I said, I’m fully satisfied with the wallet. To the point that If someone told me that it costs £50, I’d believe him.
Leer más
A 3 personas les ha parecido esto útil
Informar de un abuso
Traducir reseña a Español

JohnB
5,0 de 5 estrellas TRAVANDO Minimalist Credit Card Holder
Revisado en Reino Unido el 19 de octubre de 2018
Color: MarrónCompra verificada
The card holder exceeded my expectations after having seen other reviews. It is a very neat card holder and has a great storage arrangement with a pull out tab. The seller ought to be complimented for the product and the selling arrangements. A message was received from the seller asking for positive feedback because they are a small start up company. I decided to share my comments via Amazon, so this is my positive feedback so 5 stars all round, thank you and this is a highly recommended product.
Leer más
A 3 personas les ha parecido esto útil
Informar de un abuso
Traducir reseña a Español

Colin.
5,0 de 5 estrellas love it - nice quality and a great size
Revisado en Reino Unido el 18 de junio de 2018
Color: MarrónCompra verificada
I really like this.
I do not carry a wallet as such - I carry my credit cards and banknotes sepearately in the side-pockets of my jeans or in a zip-pocet of cargo-trousers. I do not want a bulky wallet that if lost would also mean losing all my cash and cards in one go.

This credit card holder feels to be of a nice quality, and easily takes all my credit cards and loyalty cards, without adding much additional bulk to the cards themselves.