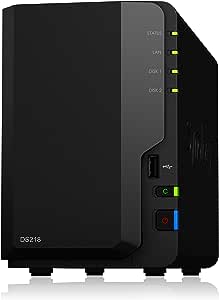 R. F. Stevens
5,0 de 5 estrellas Excellent flexible RAID1 NAS server
Revisado en Reino Unido el 29 de marzo de 2018
Nombre de estilo: WD REDCapacidad: 8TBCompra verificada
The DS218 8TB DiskStation fitted with two 4GB Red WD40EFRX drives and supplied by Kikatek works brilliantly. The options for use are varied and very flexible with lots of Apps available to install to suit ones own particular requirements. I bought this primarily as a much faster backup unit in addition to my existing old DS212j which is much slower and becoming a bit full.

After using Synology Assistant on the PC to find the DiskStation on the network and open a dedicated browser Window (NOT another Tab), configuration as the DiskStation’s administrator took about an hour, and while I’ve done it before, I left the very clear and unambiguous Help window open to remind me of the syntax for the various stages. One needs to download to the PC from the Synology website the relevant latest .dss file (172MB), and be prepared to find it on the PC from the DS218 to initialise the operating system. Then it is simple to set up the two drives in the relevant mode (RAID1 for me), assign network choices (LAN backup and server only, no streaming or remote web access) and user permissions (three users and relevant folders mounted as network drives on our machines).

I installed a few of the more usual utilities including the Security and Performance checks, but ignored the vast majority. I also let it run a ‘scrub’ to eliminate any bad blocks that might have happened during the rough journey it endured courtesy of DPD – the outer carton was very bashed - but the Synology packing within was unmarked and both drives seem OK with no bad sectors reported.

The power supply runs only about 5°C above ambient, even during the busiest time of the big transfer. The DS218 box remains at room temperature, and the fan is only just audible even when it is shifting a lot of air at the busy time.

According to W7P, after taking into account the block cleaning and Synology system overhead, these WD Red drives give me 3,932,992,659,456 bytes (3.57 TB) of available storage space.

Mr. A. J. Nolan
5,0 de 5 estrellas A painless migration
Revisado en Reino Unido el 19 de mayo de 2018
Nombre de estilo: EnclosureCapacidad: EnclosureCompra verificada
My old Synology 211, while still alive and functioning, was beginning to struggle to keep up with the demands placed on it so I bought this unit as an upgrade. I originally targeted the 218 play but this unit was only £20 more and has double the RAM, a "better" case and the capability to do "hot swaps" on the drives so I thought it was worth the extra. I began the migration with some trepidation, expecting to have to spend half my weekend re-building settings but needn't have worried. My old 2TB HDDs moved really easily into the new enclosure and the set up was extremely painless By following the synology instructions on their website one can migrate very straightforwardly including all existing user accounts and settings. It even transferred across the details of my IP surveillance camera and recording settings.

Following installation all I had to do was change the IP address on my router so that the new unit used the same address as the old one, thereby allowing all other devices that pointed to my old NAS (eg other computers that I back up on the synology HDD) to automatically connect to the new one.

Only minor disappointment is that the unit is no quieter than the one it replaced. It doesn't mean its loud, but in my study the fan noise is quietly audible even on the "quiet" setting.

A couple of minor (or maybe not so minor) irritations.

You should install the new Drive (because the other two are deprecated), there is no real indication of this when you begin, and the documentation is not really very clear on this.

To add to the confusion, there is another package called Cloud Sync. This isn't related, and is used for backing up your NAS to your Cloud Drives such as Dropbox, Google Drive or Baidu.

Fine, you will work that all out eventually, it's just a transitional period, and Drive is ultimately going to be a better solution anyway.

The next thing I had trouble with though, was setting up the NAS for external access using my own custom Domain name (not DDNS). You are almost funnelled down the route of using the Synology DDNS service.

It's a pain in the proverbial backside. This is clearly something aimed at "home" users, so if that's you, then actually it's pretty nice, but if you want to use this as storage for a small business, and would like to use your own domain name an you also have a static IP address, do not make the mistake of setting up DDNS and allowing the NAS to configure your router ports, because you will only have to undo all of that, and then set up your port forwarding manually.