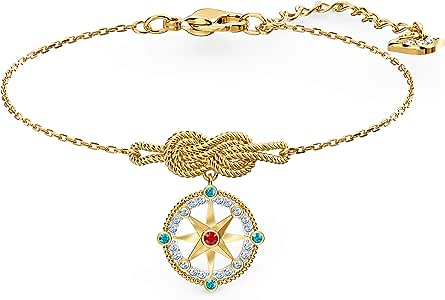 I'm finding out pretty quickly that Swarovski's jewelry is NOT geared towards American women. By saying that, I mean - they assume you have a very petite and almost childlike frame with some of their necklaces and bracelets (not all, though). They try to make up for the fact by adding an extender on it (approximately 2 inches), but the extender cheapens the look, isn't even the same size or width of the chains on the jewelry, and often times just looks very, very awkward and poorly positioned. Sometimes even the extender is not enough to make the item wearable, no matter what. This one has that extender, and most women will probably be having to use it.

I am a Medium sized American woman, barely 5'4" and medium bone structure. I cannot wear this comfortably on my wrist without the extender, but I don't need the WHOLE extender, so the excess dangles off of it awkwardly. If I use the whole extender, it's big and loose. Not only that, but the extender has much larger links and is thicker than their extremely tiny and dainty, super-thin chain, giving it a weird and uneven look. I honestly wish their chain was thicker like the extender, because it's so delicate that I'm fairly certain it will break and it is obvious that it is VERY cheaply made.

That said, the compass is gorgeously appointed and absolutely beautiful. The way the crystals are arranged on it really catches the light, and even the gold tone on the star points are designed to glint and gleam at different angles. (One item to note that is misleading in the pictures, though - the green crystals are so faintly green that you can barely tell they are that color. The pictures show them as VERY green, and that's just false. Think of the lightest mint green you can imagine, like a clear crystal ever so slightly tinted with it, and you can barely detect it only in the brightest of lights at just the right angle - otherwise it just looks white like the rest of them. That does not detract from the beauty of the pendant, though, IMO - but it's definitely different and not as colorful as they try to claim.) There's a lovely rope design above it that's fantastic and really finishes off the look. Then they attach a chain to it that's so frail looking and flimsy that most people wouldn't pay 2 cents for, much less attach a lovely pendant such as this on it. I am seriously afraid to even wear it, because I'm almost certain the chain will fail and then I'll lose it altogether. What were they thinking?!

I've noticed on some Swarovski jewelry pieces that there are some quality parts to them where the crystals are arranged, but then they skimp and cut corners horrifically on the key materials to hold it all together, rendering them no better and of even lesser quality than discount stores. It's ridiculous!

Another item that was super irritating to me was their presentation. This arrived wrapped in thick awkward plastic inside their (cheesy) paper cardboard gift box. We're talking SUPER-duper cheap-looking. If someone didn't know Swarovski was a major name brand, they'd assume this was just a bracelet from a dollar store based on how they arranged it. VERY tacky. If you are giving this as a gift, do yourself a favor and get it OUT of that ridiculous plastic and place it in a better position inside the box before giving it to anyone. You can't even see the bracelet when you open it up, because they wrapped that thick gross cheap plastic directly all around it. None of their other pieces I've received arrived like that, so I have no idea why they did that with this one. Again - what are they thinking?!

So, you may wonder why - with all my gripes - I would have ranked this 4 stars? I would have given this way less stars if I had not been so impressed with the pendant itself. To me, the pendant (the compass and the rope design) is worth it because it's simply amazing to look at and very impressive - but I am personally going to take this to a jeweler and have them remove the ridiculous, rotgut cheap chain and replace it with a much higher quality one that will serve me better. YMMV.

nekojita
5,0 de 5 estrellas delicate with lovely detail
Revisado en los Estados Unidos el 9 de marzo de 2020
Opinión de cliente de Vine de producto gratis( ¿Qué es esto? )
I have to admit, I'm not a fan of anything too 'chunky' or heavy, so this bracelet is just perfect for me. I also have small wrists so there's no problem with its size.

It arrives in a deep blue box with the Swarovski design on it and foam to keep it in place/from being damaged. It also is folded in plastic as well for protection. The chain is dainty but not too thin, and is set to dangle. I didn't have problems with the clasp, and I love the little swan emblem at the end of the dangle (with crystals). I'm not the biggest nautical design fan, but this isn't too big and with the crystals, it's something different so I find myself liking this after all. I think the compass design sets it apart.
Leer más

Southwest Consumer
4,0 de 5 estrellas Beautiful sparkle, tough clasp to work
Revisado en los Estados Unidos el 7 de marzo de 2020
Opinión de cliente de Vine de producto gratis( ¿Qué es esto? )
This bracelet is so much fun. It looks great in person - the back is as pretty as the sparkly side. However, working this clasp wearing bifocals, I could not get the clasp to fit into the dangle chain loops. I would have fit on the shortest loop, but I could not make it happen. I think if I were putting it on someone else I could, but not on myself, one handed. I did get it to clasp the whole chain itself, so I can wear it until I find someone to make it tighter/ fit into the loops. Worn loosely like this, it does not fall off my wrist because it is a short chain. The sparkle of the stones in the charm are nicely balanced. The colors are more muted than the image on my computer. In this instance, the dark blue SWAROVSKI box is very long and the bracelet is wrapped in heavy plastic so that the chain does not tangle. It is the only SWAROVSKI box/presentation that I have seen that does not completely impress me.
Leer más
Informar de un abuso
Traducir reseña a Español