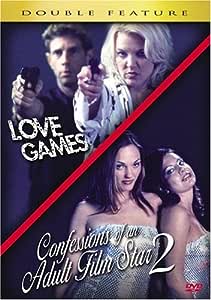 David
5,0 de 5 estrellas Better confessions. So-so games.
Revisado en los Estados Unidos el 21 de marzo de 2005
Compra verificada
Confessions of an Adult Film Star 2 follows the same formula as COAAFS 1. However, I enjoyed this one more than the first volume. This was in no small part due to the generous amounts of girl/girl action that it delivered.

There are fourteen sex scenes. Six were boy/girl, four were boy/girl/girl, four were girl/girl. Like before, they were all shorter than I would have preferred, but what you do get is very good and explicit. There's definitely no shortage of beautiful, hot women. The six confessors this time around are Olivia Saint, Jezebelle Bond, Dru Berrymore, Keri Windsor, T.J. Hart, and Nicole Sheridan. And in addition to those six, there's also Kylie Wyote, Felony, Caroline Monroe, Ann Marie, Tess Brousard, and Beverly Lynne.

I still think the concept could have been executed better, but this is definitely good stuff.

Unfortunately I don't have as much praise for the B side of this release. Love Games is just a passable softcore thriller. It actually had a pretty good story, but just couldn't ever rise above average in the sex department. Too much of the time it couldn't even achieve that.

There are eight sex scenes. Four were boy/girl, two were girl/girl, one was boy/girl/girl, and one was girl solo. They were all short and uninspired. A few of them were too tame. It had a good looking cast that included Venus, Flower, Dru Berrymore, Gina Ryder, and Nadia Foster. It's a shame they weren't used better.

Given the cheap price, the main feature is good enough for me to recommend this release though.

The Phantom
3,0 de 5 estrellas Points off for "Love Games"
Revisado en los Estados Unidos el 25 de junio de 2010
Compra verificada
First of all I was disappointed in the lack of explicit nudity in both of these features. We actually see males "down there" a couple of times but the women never.

I agree with the other reviewer that "Confessions" is by far the better of the two. Much more realistic sex scenes, much better-looking actresses. It's shot in the same fashion as  Voyeur , if you've ever seen that series. Sort of a funky and artsy non-linear storytelling fashion with a lot of lines that appear to be improvised. I was pleasantly surprised and would have given this feature four stars on its own.

"Love Games" is a waste. The women are unattractive (barely get above an A cup in the whole cast...seriously), the sex is bland, the storyline is typical. The nudity is really disappointing (not enough rear view). I fast-forwarded through nearly the whole thing. This would be a low three-star, even a two-star, feature on its own.

tldward
2,0 de 5 estrellas You get what you pay for.
Revisado en los Estados Unidos el 6 de febrero de 2010
Compra verificada
Back when I first bought this, my wife and I had just started watching these types of movies. Just imagine a lame rated R movie and add a little bit more/longer sex scenes. The nudity they show could almost be allowed in a rated R movie. This is basically super soft core. It would have been nice if the actors were more attractive as well, but like I said earlier...you get what you pay for. I gave this 2 stars because you get 2 movies.
Leer más
A 2 personas les ha parecido esto útil
Informar de un abuso
Traducir reseña a Español