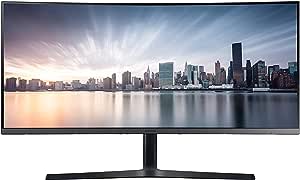 Big Dave
1,0 de 5 estrellas Very disappointing
Revisado en Reino Unido el 21 de octubre de 2018
Configuración: CurvoNombre de estilo: Thunderbolt 3Compra verificada
I’m a long time user and fan of Samsung display products. I’ve got four of their LED TVs, including an OLED model, and all have been excellent. So when I read some of the other reviews on here that quote various niggles with this display I suspected that, this being Samsung, they would have been put right by now.

Not so. This is a very disappointing product and has many flaws.

I purchased it as a replacement for my 27” Thunderbolt Display. I’m chiefly a MacBook Pro user but I do have a PC with a fairly high spec graphics card and wanted a single monitor that would allow me to connect both machines. There is nothing wrong with my Thunderbolt Display but it has only Thunderbolt inputs and my PC’s graphic card does not have a Thunderbolt output.

Thunderbolt equipped displays are rare. LG has two in their inventory but, like the Apple display, neither of these have HDMI or DP inputs. LG has been advertising some newer models that do offer additional inputs for about a year but they seem slow to get to market so I plumped for the only other trick in town, this Samsung model. Mistake.

Firstly, the stand. It’s rubbish. There must be a design flaw because, as many others here have complained, it simply doesn’t work. There is sufficient play in the up and down sliding arrangement that the panel can rock from side to side. Mine was so bad that I initially thought the panel even rotated. It was impossible to get my panel to hold in a level position. Mine sagged down to the left giving it something like a 5 degree down angle, making the left hand side of the display a good 10mm lower than the right. It’s horrible to look at. A few mm you can live with but not this amount of slant. There is no adjustment that allows the grip on the panel to be tightened. Nothing you can do but look at a slanted monitor or purchase a separate bracket on which to suspend it properly.

This alone is enough to warrant a return. I should not have to resort to an additional stand or support bracket when spending this much. Samsung, what are you doing? People have clearly been complaining about this for a long time. Fix it!

Secondly, the stand. It has no height adjustment. Well, not really. You can slide the panel down with the bottom tilting out towards you, but who needs a monitor stand to do that? Most people will want to raise their monitor, not lower it from the default position. Useless.

Thirdly, the stand. It has “integrated cable management” which usually means that you can hide a few cables down the riser tube to get them out of sight. The tube on this stand has enough room for maybe one cable, if you’re lucky. And that’s assuming that the connectors on the cable are not bulky, since the slot that they have to pass through is about 10mm wide. Again, almost useless. Most people will just end up using tie wraps to secure their cables out of sight.

Moving onto the main reason that I purchased the monitor - Thunderbolt functionality. Yes, it does display a video signal when connected to a Thunderbolt port on my MacBook and it also does convey sound to the display’s speakers. But that’s it. Samsung haven’t fully implemented a Thunderbolt Display here. What they appear to have done is route Display Port video and audio over a Thunderbolt connection. To the MacBook, the monitor appears in the devices list as a DisplayPort monitor only, not a Thunderbolt Display. Those who follow the subtleties of these different protocols might ask, given that Thunderbolt does use DisplayPort, what’s my problem? My problem is that the monitor does not behave like a Thunderbolt Display should: you cannot change brightness or adjust audio volume from your laptop. Changing volume or brightness requires that I reach around the back of the monitor and fiddle with its menu controls. For those used to the Apple world of Thunderbolt, this isn’t just a minor inconvenience, it’s a daily pain in the proverbial.

Talking of audio and speakers, the audio is not particularly good. I know that most panels don’t have stellar sound, but this model is again disappointing given the price.

And the picture itself? Not that impressive, for a Samsung OLED display. Picture quality is of course a subjective thing, but as I said at the start I do have four other Samsung products and they really are excellent, particularly the OLED panel. So this display should at least be up there with picture quality, right?

Nope. I found the images were washed out and lacking good colour depth. I tried to tweak the settings to improve contrast, brightness, colour, sharpness or any of the other proprietary bits of Samsung image processing magic. I also checked the colour profile settings on my MacBook. I could not get it to look good. I’m one of those people who normally uses a factory default setting on a display. I find that if you start fiddling around too much you end up with something weird looking. As a general rule, if you have to tweak things too much, other than perhaps brightness, you know there is something wrong.

It’s hard to find much good to say about this unit. It has appallingly bad mechanical design, only partially implemented Thunderbolt functionality, poor audio and for an OLED panel the picture quality can only be described as “meh”.

Mind you, it does have a lovely big blue THUNDERBOLT logo on the front lower left bezel which looks lovely. Right?

It’s already on it’s way back to Amazon for a full refund. Amazon have arranged a courier to collect. Excellent service from them, as usual.

Back to my trusty Apple Thunderbolt Display. After all this hassle, I think I’ve found a way to get my PC to connect to it anyway. It may require a motherboard change and the addition of an extra adapter card, but that will come to significantly less than the cost of this awful monitor.
Leer más
A 59 personas les ha parecido esto útil
Informar de un abuso
Traducir reseña a Español

Mark Ingersol
5,0 de 5 estrellas 100% sRGB
Revisado en Reino Unido el 6 de febrero de 2019
Configuración: PlanoNombre de estilo: HDMICompra verificada
I bought this after having to return an LG 34UM88 because of backlight bleed. I will mainly be using this for web development and most of the Adobe suite, so sRGB coverage is important to me. I don't know if I won the panel lottery or if this is commonly the case with this panel, but my Spyder5 Pro claimed this screen can produce 100% of sRGB, which was a relief.

I'll be handling a lot of video and photography, and since this is a VA panel, I'm a little apprehensive about color and brightness shifts occurring with various viewing angles, especially since this is a flat panel, but my experiments so far imply that it is limited, even if it is not *quite* as consistent as the (7 year old!) IPS panels I've been using to date. Calibration made quite a difference- uncalibrated, the image was greenish, and the gamma was too high. As expected though, backlight glow is less visible than on the IPS screens I have. Dragging a medium grey screen around, I could notice some brightening at more acute viewing angles, but colour temperature and balance appear quite stable, at first glance. There is a slightly uncanny mirrored effect though, which I suppose is characteristic of VA panels, a kind of glassy, shimmering reflection only seen near perpendicular viewing angles, but undoubtedly less troublesome to me than backlight bleed. The other famous VA issue, smearing of shadow tones, I haven't been able to test or observe yet.

Interestingly, only an HDMI cable is shipped with this screen, and as it turns out, at least on Windows 10 with an RTX 2080, 50hz is the maximum you can achieve. I expect this is down to the HDMI standard, and if you want the extra 10hz (which you should!), make sure to get a DisplayPort cable. (EDIT: I should have RTFM, it turns out that the port labelled "HDMI IN 2" does in fact support the full resolution all the way up to 75hz!)

It all felt a little more plasticky, disposable, and lighter than the LG, but then again this is about 3 years newer, and even at £100 less than the LG screen, despite my fears, at least with the panels I've received from each, I can already say quite confidently that this Samsung panel performs better for my needs.

I don't really game at all, so can't comment on that- but hope that this monitor and the new GPU will herald a change.

The back of this monitor is quite nice and subtle too. I'm glad they've omitted speakers- no one ever uses monitor speakers on purpose anyway.
Leer más
A 47 personas les ha parecido esto útil
Informar de un abuso
Traducir reseña a Español

Hugh
1,0 de 5 estrellas Unreliable and poor support
Revisado en Reino Unido el 26 de julio de 2019
Configuración: PlanoNombre de estilo: HDMICompra verificada
I have owned the monitor for nine months. It first failed due to a faulty backlight. The support process was awful but it finally got sorted. It then failed again and had to be repaired a second time - the returns process was again extremely difficult.