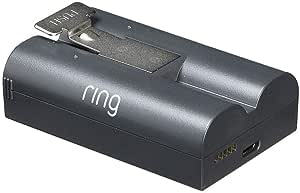 Colin
1,0 de 5 estrellas Forced to buy a replacement as they don’t last long if used and outdoors in varying temperature
Revisado en Reino Unido el 9 de noviembre de 2018
Compra verificada
I’ve had to buy a replacement battery after just under 3 months of buying a Ring doorbell 2, despite the fact that ring state the batteries should last 6-12 months (and I have the expensive solar charger- charrges 3-6% on a good day). When I raised this with Ring, essentially the response was, it states 6-12 months dependent on use and temperature, and that I had in fact used the Doorbell (that said it doesn’t always work) and on the 2nd Nov the temperature fell below 5 degrees.

So only expect Ring batteries to last if you don’t use them and you keep them at an ambient temperature, perhaps wrapped up indoors.
Leer más
A 159 personas les ha parecido esto útil
Informar de un abuso
Traducir reseña a Español

A
1,0 de 5 estrellas Counterfeit battery sold by Come'Za as originial and delivered unsafely
Revisado en Reino Unido el 7 de noviembre de 2020
Compra verificada
I ordered battery for my ring device. The battery was advertised as brand:Ring, and the picture showed original battery with "Ring" printed on it. The item delivered was a counterfeit battery (see image attached). The item was delivered from China without any proper packaging (literally as you see, wrapped in think plastic envelope). Amazing that customs or postal service did not stop this as shipped in such way it poses fire hazard. And when you get it you have no idea how stable this battery is after such shipping saga. So rather than enhancing the security of your home you in fact may risk burning it down by using an item that is counterfeit and delivered unsafely.

update:
Had email exchanges with Come'Za. They avoid admitting directly that they sold counterfeit battery and shipped in unsafe manner. Initially offered me 15% and then 30% ...40...50%discount. I insisted on full refund. Battery cannot be shipped back as this will be illegal - the battery was delivered unsafely and I as customer cannot take responsibility to ship unsafe item back.The seller seems to be still active on Amazon, despite the multiple complaints in November 2020 about this scam on the product page as well as on Come'Za Amazon seller's page. After 2 weeks and 5 (!!!) phone calls with Amazon finally got refunded. Avoid this rogue seller. On this occasion the customer support from Amazon was inefficient and poor, probably reps facing system restrictions . My advice? Persist. If you do you give up (rogue sellers count on it) you allow the seller and Amazon to make profit and you in fact promote this practice and we sll suffer. If there is zero tolerance on custommers side such situations will be very rare.
Leer más

Steve D
5,0 de 5 estrellas Great battery, really does the job !
Revisado en Reino Unido el 4 de febrero de 2019
Compra verificada
I bought a couple of these for my Ring Spotlight Battery Cam, one to fill up the vacant space in the cam, as it is only supplied with one, and the second one to keep charged in the house, ready to replace as necessary.
I installed my cam on 4 December 2018 and it is now 4 February 2019 and there is still 19% left in the original battery, the second one is still at 100%.

You get a little lead that you plug into the battery and other end into a USB A socket to charge the battery up.
There is a lot of rubbish talked about Lithium-Ion batteries in general but they are really suited to cold conditions, I have used then for many years in weather stations, shed lights, and greenhouse instruments, and they keep going fine in even the coldest temperatures unlike other types (Alkaline for instance) which fail all the time.

I am more than happy with these batteries, and of course they should last a LONG time too, they keep their charge well when not used and you don't need to charge them all the time as they will last at least 2 months if my example of the cam is the norm.
They are not expensive either, think of the cost if the camera was powered by say Duracell batteries, these will last a LOT longer too as the can be recharged many, many times !

IMPORTANT UPDATE - 11 February 2019
The only downside is that they seem to be made by a different manufacturer than the ones originally in the Ring cam, the locking tab is slightly different (lighter stamped Ring logo on it for starters) and when I put it in my cam all seemed well as the red light came on, so I shut the case door and came down the ladder.
When I opened the app on my phone the battery was not shown as not in, so I went back outside, opened the case door of the cam and be battery fell out, landing 12 feet onto concrete... oops fortunately only very slight damage to the plastic casing though !
I picked it up and inserted it back in again, there was a 'click' and the red light came on, but it was very easy to pull the battery out... I tried the orignal battery in and this time the 'click' was a LOT louder and the battery stayed in fine.
Then on the 'faulty' battery I decided to very carefully bend the metal locking tab upwards, away from the battery body then tried it in the cam again until it clicked in with a LOUD click, then it locked in fine..
I then tried the second spare battery I had bought, and the problem was exactly the same... once again bending the metal tab upwards solved the problem after a couple of tries.
This IS NOT the sort of thing you really want to find out while stood on a ladder in the rain, they should work straight away, good job I am from an engineering/problem solving backgound otherwise I would have sent then straight back for a refund, so PLEASE TAKE NOTE, make sure the battery clicks in with a LOUD click, otherwise, like me you will have to adjust them !!!
Leer más
A 77 personas les ha parecido esto útil
Informar de un abuso
Traducir reseña a Español

Mansell360
5,0 de 5 estrellas Extra battery & MicroUSB Lead as expected
Revisado en Reino Unido el 26 de junio de 2019
Compra verificada
I purchased this to use as a backup battery for my Ring door view cam while charging.
It’s exactly what’s expected another battery to use so I have no downtime in monitoring.
It comes in a little Ring branded box with the required Micro USB charging lead.
For anyone looking the battery is a V4.
Leer más

Dave
1,0 de 5 estrellas FAKE battery, not a genuine Ring battery. DON'T BUY!!!
Revisado en Reino Unido el 6 de noviembre de 2020
Compra verificada
This seller advertises this battery as a 'Ring rechargeable battery', but it is not a genuine Ring battery! See the photo attached to demonstrate this. The one with 'ring' written on it is my original battery that came with the camera so look at the difference. I didn't notice it was arriving from China either, hence the 4 weeks wait for the battery. I ordered it on 3rd Oct and received it on 6th November 2020. Why is Amazon allowing fake items to be advertised as genuine? It could leak some liquid and it doesn't even click into the camera properly but why would it since it is fake! Extremely disappointed and luckily it is only a small item but I should have purchased it from Ring or Argos directly. I need to reduce my activity on Amazon after many years of being a loyal customer purchasing items every week!
Leer más