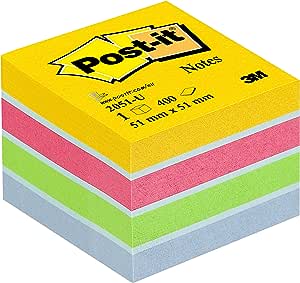 Miss Moose
2,0 de 5 estrellas Very poor! I wouldn't recommend.
Revisado en Reino Unido el 30 de julio de 2019
Color: Coral/Rosa/BlancoCompra verificada
I have been buying Post-It Notes for years. I originally used to buy the standard ones, which always stuck ok, but then if you wanted to move them around and reposition them, they would lose their stickiness quite quickly. For this reason, I then went on to buying the Extra Sticky ones, and have been using those for a few years now. I use them to make notes of chores I have to do, and stick them to my kitchen units and the edge of the worktop, next to the kettle. I am disabled and very ill, so the majority of the notes are up there for months or even years, as I am not well enough to complete the jobs. With the majority of these outstanding jobs, I reinforce the notes with a wee bit of sellotape, as I don't want them falling off and potentially landing on the cooker rings. I also use the notes to stick onto my letterbox for the delivery guys, if I'm not around, again with sellotape in case it gets windy. I reuse them time and time again for this job.

The Extra Sticky Post-It Notes have become more and more expensive over the years, so this year, I thought I would try a cheaper brand, and am very pleased with them. I now use two different colours....one for non urgent jobs, and pink ones for urgent jobs. For the Pink ones, I thought I would go back to these regular Post-It Notes, but am shocked by the very poor quality! I can compare them directly to the Extra Sticky ones, and even the cheap ones, and these are terrible in comparison. They are a much thinner paper, so much so, that using a Sharpie pen, often bleeds through the note and onto the one below. They are so thin, that they curl up in the heat of the kitchen, which neither of the other two do. Plus....they don't stick!! Not even on the first go! They are absolutely rubbish! I am really disappointed, and won't be buying them again. I even wonder if they might be fake Post-It Notes! The quality is that poor!
Leer más
A 8 personas les ha parecido esto útil
Informar de un abuso
Traducir reseña a Español

Reebies
5,0 de 5 estrellas Post it blues!
Revisado en Reino Unido el 20 de marzo de 2021
Color: Verde/Fucsia/AzulCompra verificada
Typical Post It's in a cube with blue hombres colours rather than the original yellow rectangular form.
Rather good adhesion and once on a document, white board etc, unless it is folded or curled, it will remain where it was put until it's removed. Can be re-adhesed if done quickly after removal and not allowed to pick up hair, dust and debris along the adhesive edge.
The only thing I would have liked is the ability to choose what colour to use at any given time. This isn't possible as there is no break between last notes and the first note of the other colours.
So you must start with the first colour and continue to use that colour until the start of the new colour unless you can seperate them without affecting the adhesive strips.
All in all, a stationary staple but I guess more attractive to students, or younger people rather than fans of the original yellow notes.
Will buy again
Leer más
Informar de un abuso
Traducir reseña a Español

Ms. S. Fregly
4,0 de 5 estrellas Literal Life Savers
Revisado en Reino Unido el 6 de octubre de 2016
Color: Rosa/Naranja/Fucsia/Verde/AmarilloCompra verificada
If only they came in every color of the rainbow: ROY G. BIV (red, orange, yellow, green, blue, indigo, and violet). My life was empty before I received these and I was contemplating suicide, but these little rays of sunshine filled the black void in my soul. Now, if only they came in all the colors of the rainbow, I know my life would be complete. It would be worth living.
Leer más
A 5 personas les ha parecido esto útil
Informar de un abuso
Traducir reseña a Español

They arrived before due date, slthough the box they came in was a reused old marigold washing up glove box. So improvement could be made on that
for a perfect delivery of goods.
Leer más
Informar de un abuso
Traducir reseña a Español