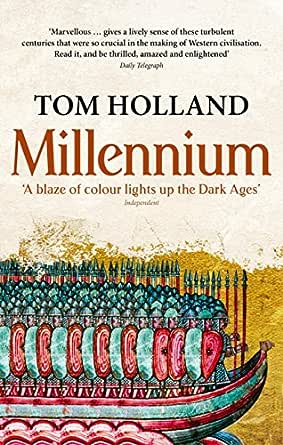 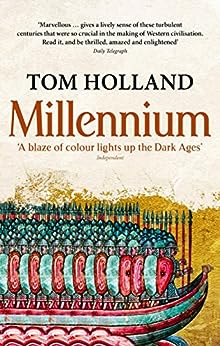 Millennium: The End of the World and the Forging of Christendom (English Edition) Versión Kindle

'At last, a book that sheds much-needed light on those 1,000 years between Roman Britain and the Norman conquest that we call the dark ages (Sue Arnold GUARDIAN)

Tom Holland received a double first from Cambridge. He has adapted Homer, Herodotus, Thucydides and Virgil for BBC Radio. His scholarly style is pefect to reposition him as a writer of non-fiction as well as fiction. --Este texto se refiere a una edición agotada o no disponible de este título.

David K. Warner
4,0 de 5 estrellas All roads lead to Clermont
Revisado en Reino Unido el 19 de abril de 2020
Compra verificada
This is an engaging populist romp through the early Middle Ages that within the framework of the Millennium (and millenarist fears and hopes) seeks to draw together the development of the Holy Roman Empire and the emergence of papal monarchy, the two contending forces claiming to be be the temporal and spiritual heirs of Rome, in order to explain the distinct culture of the medieval Christendom that evolved in the eleventh to fourteenth centuries and was the foundation of modern western European society.
This is an overwhelmingly political narrative, focusing upon emperors and popes and kings and lords, and so has little to say about the economic and social changes that underlay the creation of the more stable, confident, and resurgent Christendom that emerged after 1000, and, while touching upon knighthood and castellateion, quickly brushes over the formation of a recognisably feudal land tenure (except in a brief social contract discursion), and says nothing about demesne farming beyond the great ecclesiastical estates of Cluny, or the environmental and climatic changes, which together helped to produce the population explosion and economic growth that profoundly affected demography, society, agriculture, and material culture in 1000 to 1300. So, this is a history of origins - the origins of medieval Christendom - but only as seen through a political lens. Tom Holland's medieval Christendom is therefore predominantly a political construct, one driven by the symbiotic rivalry of empire and Church, and conceived in terms of ideas about the Book of Revelation and the End of Days associated with the millennium from Christ's birth and death. It is a story told through the deeds of great men and, sometimes, great women, and framed by elite political culture and elite thought and action. It is a popular history from which the mass of the people is mostly excluded.
Holland brings his usual dramatic and enthusiastic prose to his tale, with amusing asides and selections that support his viewpoint, beginning in a prologue with that most symbolic of confrontations between church and state, the submission of the emperor Henry IV to Pope Gregory VII at Canossa in 1077, at the end of his period. He then explains how these two powerful individuals and the European societies at which they stood at the head got there, starting with the knitting together of the post-antique conception of the Roman Christian empire in the West with Germanic kingship, through the foundation of the Carolongian and Ottonian empires, with diversions to the creation of the French, English, Scandinavian, and Kievan monarchies and brief trips to the other, older, eastern Roman empire of Constantinople, and on to the Gregorian and Cluniac reform movements of the eleventh century that rejuvenated the papacy and reordered the Church, bringing both a check to and a legitimisation of the power of secular rulers and division within Christendom itself, a division of Roman West from Orthodox East, and a division between the aims and actions of those who exercised spiritual power and those temporal power.
At the end of his book, Holland returns to Canossa, its context now having been established, and charts the recovery of Henry IV from his subjugation and the apparent failure of Gregory VII. However, he does not leave the story there, but goes on to the papacy of Urban II and the council of Clermont with the Pope's call for a crusade to take back Jerusalem and the Holy Sepulchre into Christian hands, which by allying the religious power of papal monarchy with the military prowess of knighthood provided both a solution to the Gelasian knot of the two swords, spiritual and temporal, and a human manifestation of millenial hopes for the defeat of Antichrist and the Second Coming. All roads, it seems, do not lead to Canossa, but to Clermont, and the Crusades are not an aberration or the product of insensible prejudice, but both the consequence of the foundation of medieval Christendom and an inherent manifestation of the civilisation thereby created. The Crusades are the defining characteristic of the western medieval society that emerged after 1000, and whose creation Holland seeks to describe within the distinct history of western European, Christian, and Roman, identity.
This book is a lively read and an entertaining introduction to a period often erroneously regarded as the Dark Ages, and will stimulate discussion for those already familiar with the period and medieval European history.
Leer más
A 15 personas les ha parecido esto útil
Informar de un abuso
Traducir reseña a Español

Neil Carmichael
3,0 de 5 estrellas Interesting but hard work
Revisado en Reino Unido el 22 de septiembre de 2019
Compra verificada
The central thesis of the book is that folk were in awe of the date 1000 as it was believed to be the date of the second coming. There is not much evidence produced to support this and it frankly doesn't impact the story much. The real story is that during the 10th and 11th centuries Christianity spread across Europe and became the universal religion. Still, the kings, emperors and knights continued to hack each other to bits from the Baltic to the Pyrenees. Through all this carnage the Popes tried to maintain supremacy over the warlords; sometimes successfully, sometimes not.
So far, so interesting and well written. However, the book really loses momentum in the middle. Many paragraphs say the same thing several different ways and in the plethora of kings and queens and all their kin, it becomes hard to keep track of the wicked uncles and saintly wives. A book with lots of good bits which could have been great if it had a chunk of padding edited out, to the benefit of the narrative.
Leer más
A 11 personas les ha parecido esto útil
Informar de un abuso
Traducir reseña a Español

C. Ball
4,0 de 5 estrellas Illuminating the Dark Ages...
Revisado en Reino Unido el 16 de febrero de 2016
Compra verificada
The years between the fall of the Roman Empire and the turn of the first millennium are generally known as the 'Dark Ages', an era of brutality, poverty, illiteracy, paganism and savagery, when all the advances of the Greek and Roman civilisations seemed to vanish as though they had never been, and the shape of the countries we know as England, France, Germany, Italy, Norway, Denmark, were barely coming into focus. Such was the case in Western Europe, at least. There was no such Dark Age in the Islamic or Byzantine Empires. In these years, it would have been all but impossible to imagine a time, not so far in the future, when both these mighty empires would be toppled and Western Europe would stand triumphant, stable and orderly, crowned by the splendour and spiritual muscle of the Pope in Rome.

Tom Holland chronicles the course of the centuries either side of 1000 AD, a time of much convulsion and upheaval: the 'birth pangs', as he calls it, of Western Europe. These were the years in which France was emerging from West Francia, a breakaway portion of the empire of the Franks, the empire of Charlemagne, who had been crowned emperor of the West in Rome itself and acknowledged as the western counterpart of the eastern emperor in Constantinople; in which the Scandinavia countries of Norway, Denmark, Iceland were turning away from Odin and the old gods and embracing Christianity; in which Vikings were settling, by force, in France and forming the land that would become Normandy; other Norsemen were settling further in the continent and becoming known as the Rus, eventually giving their name to Russia; yet more Normans were invading and conquering England, Sicily and southern Italy; the Muslim caliphate was splitting in two, with the Umayyad clan basing their dynasty in Cordoba in Muslim Spain, al-Andalus, and the Abbasid caliphate waging persistent war against the Byzantines.

And above all of this, the Church was establishing its grip, the power and influence of the Pope reaching into every kingdom - the secular and the spiritual no longer as separate as they had once been. Popes were claiming new powers and rights over kings, culminating in many kings coming under the papal sway as vassals, crowned and acknowledged by the Pope alone - in effect, the Pope was claiming that the whole of Christendom was subject to him and the Church. And in an act that would have lasting consequences, popes were coming to embracing the concept of a church-blessed 'holy war, a concept already well embedded in the Islamic jihad. In the space of two scant centuries, all this came to pass - and how much can be ascribed to 'millennial fever', to the fervid belief that the End of Days was nigh and the Antichrist due, with the thousand year anniversary of Christ' birth on the horizon, is the major theme of this book. The years before the turn of the millennium were dark and feverish, with many believing that the world was sinful and needed perfecting before the End of Days, giving rise to much of the impetus that propelled these changes.

Tom Holland is a marvellous writer - he has a tone that somehow manages to be wry and melodramatic at the same time, quite a skill. This isn't academic history, it is very much history for the uninformed, but there can be few authors better at painting such a sweep of history so enjoyably. I found the central theory of the millennial fever a little lacking, and it only really forms a central theme in the first half of the book. But I didn't enjoy this book any less for that. This is an era of history I've never been especially interested in - it's either Greek, Persian and Roman, or skipping over these middle years to get to 1066, but I could hardly put this book down.
Leer más
A 26 personas les ha parecido esto útil
Informar de un abuso
Traducir reseña a Español

flycatcher
2,0 de 5 estrellas A rather disappointing book, I thought.
Revisado en Reino Unido el 5 de enero de 2017
Compra verificada
In my personal judgement this is not Tom Holland's finest. In fact I found it rather strange and woolly. there is some fascinating information in it but in the end I judged it not worth the effort. Others may well disagree - perhaps it's just me!
Leer más
A 10 personas les ha parecido esto útil
Informar de un abuso
Traducir reseña a Español