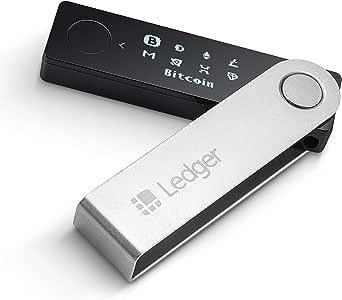 "Ledger Official" or "Ledger" is the owner and manufacturer of Ledger products. Never buy a used Ledger Hardware Wallet

Not your keys, not your coins

AMeador1
1,0 de 5 estrellas Not working properly and lackluster support...
Revisado en los Estados Unidos el 18 de junio de 2019
Compra verificada
** 6/29/2019 - Update **
I have slowly went back and forth with Ledger Support with no resolution to this point and they have gone silent too long. The last update was them telling me the transferred my issue to their 'Teams'. A couple of days later I asked for an update and have heard nothing from Support or their Team. So, I have initiated a return to Amazon.

I tried the suggestions Support gave - to reset Bluetooth parings and then the reset the device and start over. No change. Cannot connect to my phone. My phone is a Sony XA1 Ultra with Android 8 and all current updates applied. The phone does not see the Nano X when opening the Bluetooth paring settings on the phone. However, the phone does see other non-pared Bluetooth device as well as paired devices and is able to work with the paired devices fine. So, I tried pairing the Nano X with my PC that has Bluetooth. My PC does see the Nano X - but a new discovery - the Nano X does not support connecting to a PC via Bluetooth. How ridiculous! I have found where others have ran a virtual machine on their PC running an Android x86 emulator and can connect the Nano X to that and then use the Ledger Live App that way - but what a kludge of a workaround! This, along with the poor support, has given me reason to adjust my review to 1 star verses 2.

Anyway, apparently the Nano X is working to some extent with Bluetooth as the PC sees it. Perhaps a standards issue in following Bluetooth protocols on the phone or the Nano X? Not sure which and I'm not going to buy a different phone to test.

I submitted my initial support ticket with Ledger Support on 6/17 - and as of today 6/29 - no resolution and lacking responsiveness have turned my off. I will not buy this unit again - at least for a while. I'll let them work the bugs out of it first, then I MIGHT buy it again later. For now it is no more useful to me than the Nano S - and that is currently much cheaper of a solution.

** Original review: **
I setup my Nano X yesterday. The instructions were a bit lacking. I wanted to clone an existing Nano S - which I did, but the instructions were not as detailed and thorough as they could have been - which is concerning - I don't want to lose crypto assets due to a simple mistake. In the process of putting in the secret keywords to restore the previously existing wallet info, it was a little difficult. It has two buttons that you use to confirm a selected word, but often, the buttons click at slightly different times. I think this caused it to fail the first time around as I think when I tried to confirm a word - it ended up advancing to another word in the list before recognizing that both buttons were pushed, causing me to enter the next - incorrect word. It would be nice if it would show the word you confirmed, and then let you re-confirm, but it didn't - just goes on to the next word.

So, I got it restored and working and was able to use the Ledger Live app on the PC to install the currency apps on the Nano X for currencies I work with. That all went fine - other than, it would be nice if this screen in Ledger Live would show if the app is already installed. It only shows the option to install - even after the app has already been installed. But it worked at least.

The other thing I noticed is the batter drains REALLY fast while working with it. I'd guess maybe an hour before dead from a full charge - while on and being used. That is a guess - but I had it at 57% charge and while trying to connect it to my smartphone over Bluetooth - maybe 20 minutes worth, it was at 25% when I gave up.

That leads to the primary issue. I got this primarily to be able to use it with Ledger Live App on my phone via Bluetooth. However, my phone as of yet, has not been able to 'see' the Nano X as an available Bluetooth device to pair it. I found an article on Ledger's support site that said to reset Bluetooth pairings on the Nano X and to restart it - but that made no difference. I tried varies combinations of turning on/off Bluetooth on the Nano X while turning on/off Bluetooth on my phone, restarting my phone and doing all the same again. Also used the Ledger Live App to setup a Nano X - which it appears to try to pick up the Nano X via Bluetooth - but nothing ever worked and Bluetooth settings on the phone never acknowledged the Nano X device. The phone did see other available Bluetooth devices that I have not paired, so the phone seemed to be working fine.

I started a Ledger a support ticket - but received an email back saying due to larger than normal support issues that it could take 5 days before they get back to me! You'd think that maybe when releasing a new product that they may have beefed up Support a bit to handle what should be an expected uptick in support requests. So, I ordered this last week, but ended up being out of town when it arrived and now got to it yesterday to set it up. Add 5 more days and then who knows how long to go back and forth with them via email - and I may start approaching the time limit on returning this through Amazon - so return it now - or wait? Not sure yet and not sure if I'll re-buy it either.

I'll update this post if I end up dealing with their support to resolve this issue - if it can be.
Leer más
A 65 personas les ha parecido esto útil
Informar de un abuso
Traducir reseña a Español

Be careful with this. If you're looking for cold storage for btc, eth, xrp, and a few others, this may work for you. Don't bother checking the "supported coins" list Ledger puts out - it's only part truth. Yes, the hardware *can* support many coins, but the companion app used to load accounts supports only a handful of coins. I was looking for a singular solution to store my alt coins, but this isnt it. You have to jump through hoops with 3rd party apps and multiple steps to even try to use this with most coins, rendering it pretty much useless for my application. Shame on Ledger for not disclosing the difference between a coin being supported by their native app and one that you can Jerry-rig to work with their overpriced USB drive. Save yourself a lot of money and just load wallets on an ironkey.
Leer más
A 56 personas les ha parecido esto útil
Informar de un abuso
Traducir reseña a Español
Ver todas las reseñas
Amazon Prime: envíos rápidos, GRATIS e ilimitados y mucho más
Los clientes de Amazon Prime disfrutan de Envío en 1 día GRATIS en dos millones de productos y Envío en 2 o 3 días en millones de productos más, Acceso a series y películas en Prime Video, incluyendo las series Amazon Originals, más de 2 millones de canciones y cientos de listas de reproducción sin publicidad con Prime Music, cientos de eBooks en Prime Reading, Acceso Prioritario a las Ofertas flash y Almacenamiento de fotos gratis e ilimitado en Amazon Drive.
> Más información