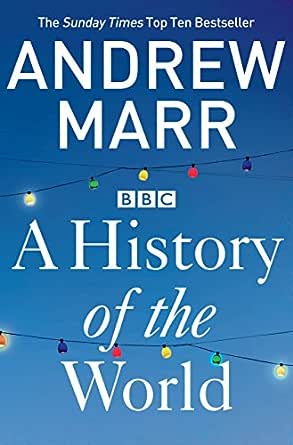 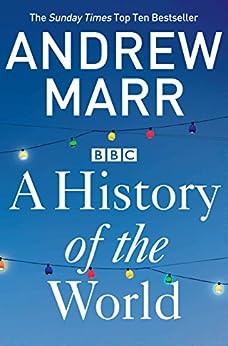 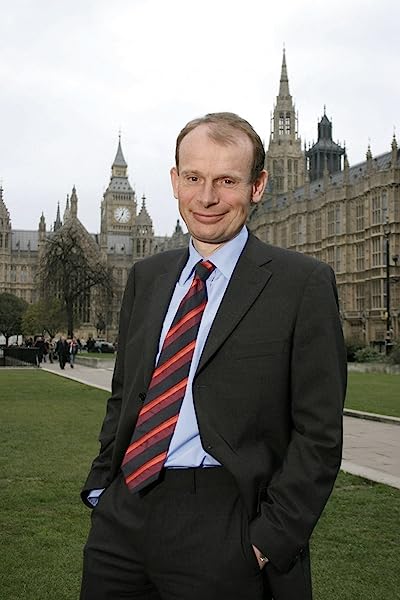 A History of the World (English Edition) Versión Kindle

"As the book of the BBC films, it is televisual, yet done with journalistic panache." --The Times

"It is a wonderful book. The series is nothing special. But the book is and is startlingly different; here Marr's writing and his control of the material are remarkable. It should be required reading for all students of history, even more so for those who teach it in universities." --Spectator --Este texto se refiere a la edición kindle_edition .

Andrew Marr, author of two best-selling histories of Great Britain now turns his attention to the world as a whole. A New History of the World takes readers from the Mayans to Mongolia, from the kingdom of Benin to the court of the Jagiellonian kings of Poland. Traditional histories of this kind have tended to be Euro-centric, telling mankind's story through tales of Greece and Rome and the crowned heads of Europe's oldest monarchies. Here, Marr widens the lens, concentrating as much, if not more on the Americas, Africa and Asia. Instead of focusing on one episode of history taking place in one place, he draws surprising parallels and makes fascinating connections, focusing on a key incident or episode to tell a larger story: for instance, the liberation of the serfs in Russia, which took place at the same time as the American Civil War, which resulted in the abolition of slavery in the US. But he begins the account with an episode in the life of Tolstoy, who racked up huge gambling debts and had to sell land and slaves as a result. Fresh and exciting, this is popular history at its very best. --Este texto se refiere a la edición kindle_edition .

Andrew Marr was born in Glasgow in 1959. He studied English at the University of Cambridge and has since enjoyed a long career in political journalism, working for the Scotsman, the Independent, the Daily Express and the Observer. From 2000 to 2005 he was the BBC's Political Editor. He has written and presented TV documentaries on history, science and politics, and presents the weekly Andrew Marr Show on Sunday mornings on BBC1 and Start the Week on Radio 4. Andrew lives in London with his family. --Este texto se refiere a una edición agotada o no disponible de este título.
Leer más

Daniel
5,0 de 5 estrellas Culture in a nutshell
Revisado en España el 15 de agosto de 2019
Compra verificada
I've never payed attention to history classes in my school days. But now, I was looking for enlightment on how the hell we got here? Why humans can't live in peace on a world where we have got enough of everything for everybody. I needed a global vision of the world and his history. This book provides just that. A global.vision of the world since the beginning to our days. Now everything becomes clear to my mind when a read a newspaper. This book gave me the first and only history class I've ever needed. It should be mandatory in hi-school education. So much to learn and so well written and explained.
If you take Ernst History of the world as a children introduction to history, this one would be the same kind of book for young adults.
It's maybe not a book for history lovers, but for history newcomers. It opens all the doors. There are now so many books from the references I want to read! To put it on a single line. This book made me fall in love with the history. Give it a chance, it's like game of thrones without the dragons. ;-)
Leer más
Útil
Comentar Informar de un abuso
Traducir reseña a Español

Thomas
5,0 de 5 estrellas Buy it
Revisado en Reino Unido el 3 de octubre de 2017
Compra verificada
Great book. It is a fascinating read. If you have always been interested in reading and are looking for an area to investigate further this is a great book, as a result of its' descriptions of various era's I didn't know much about I have bought several other books to learn more about them.
Well written, and I highly advise it.
Obviously what should or should not have been included is a controversial topic but I didn't want to stray into that, obviously things had to be cut to fit in one book and one could have many opinions as to which parts of history deserve the most attention.
Leer más
A 22 personas les ha parecido esto útil
Informar de un abuso
Traducir reseña a Español

The author, so well known for his political interviews, takes a side step to become an enthusiastic story teller who should inspire generations of people to question what they think they know about even the times that they have just lived through. A fascinating delve into history that shows world events, how these have been portrayed in history lessons and in the media, and why they still resonate in the modern world.
Leer más
A 21 personas les ha parecido esto útil
Informar de un abuso
Traducir reseña a Español

Mark Pender
5,0 de 5 estrellas Marr achieves the impossible- a history of the whole of time which reads like a novel.
Revisado en Reino Unido el 24 de abril de 2019
Compra verificada
This is such a good book! To cover such a wide subject in 500+ pages is remarkable. To make it interesting and enjoyable, even more so. The structure is good. Marr uses mini-chapters which overlap in time so that you hop from country to country, or topic to topic, starting in pre-history and finishing in the present day. Each can be read alone although I found myself reading three or four every evening. I liked the way Marr allowed personal prejudices (they are quite obvious) and the odd joke to find their way into the text. This is almost a “couldn’t put it down” book but it’s better than that.
Leer más
A 8 personas les ha parecido esto útil
Informar de un abuso
Traducir reseña a Español

Keiran McAllister
2,0 de 5 estrellas Disappointing
Revisado en Reino Unido el 28 de marzo de 2020
Compra verificada
I bought this kindle book because I love reading about all sorts of history. I also quite enjoy Andrew Marr on the television and the few reviews I read were good. On top of that it was on offer at £0.99 pence. What could go wrong?
It arrived on my device and I started to read. I wasn't 'grabbed' by the prose style, but stuck it out through I think 7% of the book hoping to get drawn in. It didn't happen, I began to get frustrated and irritated by the narrative.
OK, not one to give in, I thought like other good books it was taking a while to warm up. So I skipped on to further chapters.
Again after several attempts it just had the same effect on me, irritation. Where was the history? What is going to grab me with this version of history? I couldn't relate to it.
So, I'm sorry to say this book will lurk on my kindle unread as I return to other histories that excite and read like proper stories should, because that is essentially what his - story is and should be well told involving the reader in times gone by.
We are all different and as witnessed by the reviews I read others will enjoy this book. But for me sadly it fails to engage.
Leer más
A 4 personas les ha parecido esto útil
Informar de un abuso
Traducir reseña a Español
Ver todas las reseñas
click to open popover
Amazon Prime: envíos rápidos, GRATIS e ilimitados y mucho más
Los clientes de Amazon Prime disfrutan de Envío en 1 día GRATIS en dos millones de productos y Envío en 2 o 3 días en millones de productos más, Acceso a series y películas en Prime Video, incluyendo las series Amazon Originals, más de 2 millones de canciones y cientos de listas de reproducción sin publicidad con Prime Music, cientos de eBooks en Prime Reading, Acceso Prioritario a las Ofertas flash y Almacenamiento de fotos gratis e ilimitado en Amazon Drive.
> Más información