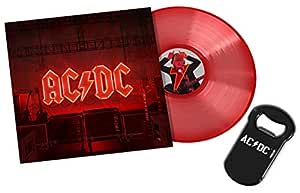 Mandrek Larl
5,0 de 5 estrellas Proves the rule that If it ain't broke don't fix it ...
Revisado en Reino Unido el 13 de noviembre de 2020
Compra verificada
I remember AC/DC playing Guildford in November 1976, not because I was there but because a group of County School girls I knew from the bus were going to see them, and they were dressed-up for the occasion in their "school-girl" outfits [I was young and impressionable back then and some happy memories never fade! ]

That was a long time ago now and forty plus years on with the ravages of time having taken their toll on Australia [and County Durham's] finest it seemed it was all over for AC/DC, but we should have known better than to write off these old rockers! Because six years after their last album, AC/DC are back with twelve new tracks, they're still doing what they have always done better than anyone else, they're still as good as ever, and they're still about to rock.

From the opening bam-bam, bam-bam of "Realize" this is signature AC/DC stuff, solid power rock built on the rhythm section of Phil Rudd's drum kit and Cliff Williams's bass, topped-off with guitar riffs from perpetual school-boy Angus Young, and, with second song "Rejection", Brian Johnson shows that his tortured larynx can still deliver his trademark Geordie growls and roars. So far so good, there's nothing new here, and that's exactly what we wanted.

Third track "Shot In The Dark" was the lead single from the album and its bombast should be familiar from the extensive air-time it garnered. Things change gear slightly though for "Through The Mists of Time" with less power punch than the opening tracks this is the closest thing you'll find to a ballad here [but it's not a ballad by any stretch!].

The blues rocker "Kick You When You're Down" with its driving beat, Johnson's vocals and Young's wonderful guitar work is currently my favourite, "Witch's Spell" is a bit too paint by numbers for me though while "Demon Fire" sounds like something you've heard before but can't quite put your finger on. "Wild Reputation has an overlapping call and response between Johnson and Young before Young cuts loose with a classic solo, his solos across the album are superb, but this may be the best.

"No Man's Land" is another song in the classic AC/DC mould adhering firmly to the album's underlying mission statement: if it ain't broke don't fix it; while I can see "Systems Down" making a great live fists-in-the-air number if [when?] the guys get back on the road; and then there's "Money Shot" proving there are still double entendres in AC/DC land even when your vocalist is 73. Finally, "Code Red" with its wonderful walking guitar riff closes the album leaving you wanting more.

This may not be AC/DC's best album but it's up there with the best: the sound is crystal clear throughout, the song selection has sufficient variety to sustain interest, the playing and vocals are spot-on [even the backing vocals deserve a credit], the production is excellent, and the packaging is gorgeous; despite an average age of 67 AC/DC prove that they haven't lost it and are still ready to rock.

Recommended, and a good place to start if you're new to AC/DC and don't yet know what all the fuss is about.
Leer más
Informar de un abuso
Traducir reseña a Español

Mark Chisholm
5,0 de 5 estrellas Emotional - Brilliant
Revisado en Reino Unido el 15 de noviembre de 2020
Compra verificada
Back when I was a young chap there was a point when something clicked inside and you became interested in music in a tribal way. This was 70's/80's and at school there were Mods, New Romantics, Punks, Ska, Reggae and of course rock/metal. You were defined by your choice of music and it was deeply important and thus the music of all genres was great. Sadly today it's bilge punted out by a music factory to make a few quid off young girls.

And I arrived at my epiphany at just the correct time. Back in Black had just been released and I was 13 and up to that point little interested. Well for me at a mates house about one peel into the tolling bell was like the scene in the Blues Brothers where Joliet saw the light in the church. I was hooked. I mean totally hooked line and sinker and from that millisecond to this one today I have been a massive ACDC fan and hard rock and metal in general. In many ways it has defined my life and my friends. I'm sure many here would be the same.

My point being that ACDC is more than 'just a band.' They are something special to many of us and the release of a new album is an event. This one has more weight than most and I approached it with a bit of trepidation. Lets be fair here since Fly On The Wall - and yes I love that album - ACDC's output has not been as good as that golden era in between the late 70's and early 90's. Some massive tracks like Thunderstruck, but no albums that are bangers all the way through. So, I didn't expect this record to be different. I figured a couple of great tracks but mostly okay.

Nope. Not a bit of it. This without a doubt is the best album they have put together since Fly. In fact the best way to encapsulate this is that it's ACDC back to the 80's - with better production. It's that good.

Every song works. Yep, of course some are better than others but, this is the first time in decades that I've repeat listened to the entire album about 10 times in a row. I absolutely love it.

So, opening up with Shot in the Dark sets the tone - nearly... While we always expect straight forward rock this album is a little different. I sense a slight change and there is a varied pace to the music. Yes, there are the usual rock clichés but there is poignancy here too. The guitars have more emotion - which I know sound like guff but I can feel it.

The song that nailed it for me was 'Through the Mists of Time.' I welled up if I'm honest because it is an end of the road song. It's the song that say's 'Goodbye.' I know that it's about Malcolm but I also think it's about ACDC. Given their ages, and assuming there will be a tour - God, please let there be a tour - the likes of Brian will be heading towards 80 and one has to be honest about that. I certainly felt that this was a song about the end of an epic run of rock history.

If you have tiny bit of rock and roll in your body then this album is an absolute killer.

What a way to bow out. It's been a blast. Cheers guys for the music of my life.
Leer más
Informar de un abuso
Traducir reseña a Español

second-hand-songbird
5,0 de 5 estrellas Bolstering Their Wild Reputation!
Revisado en Reino Unido el 15 de noviembre de 2020
Compra verificada
The odds were stacked against AC/DC, to say the least. Their frontman had to leave during a hugely successful world tour, their drummer was embroiled in criminal charges, their bassist stepped down. And their rhythm guitarist/co-songwriter, Malcolm Young, sadly passed away in 2017. But somehow, despite it all, in the midst of global pandemic, AC/DC released their 16th/17th studio album, Power Up. And it is glorious. 'Realize' is a stunning opener to the record, definitely a suitable single - AC/DC as you know them, back on top form and echoing their '90s days in The Razor's Edge-esque material. 'Rejection' is a track Bon Scott would have been embarassed to write, and it has such a kicking backbeat. Power Up's lead single, 'Shot in the Dark' rocks out amongst their best, and never tires to elicit an air guitar, or two. The album hides a poetic gem in atypically-titled 'Through the Mists of Time', a worthy, melancholic tribute to the boys' fallen brother, Malcolm. 'Kick You When You're Down' has one of the band's best riffs ever, and 'Witch's Spell' combines the catchiness of Black Ice's 'Big Jack' with Ballbreaker's hauntingly epic 'Burnin' Alive'. 'Demon Fire' has echoes of that album, too, with 'Wild Reputation' being exactly what you'd expect from the band. 'Money Shot' and 'No Man's Land' are some other great tracks of note.
Thing is, even if this wasn't a mighty comeback, it would just be a brilliant album in and of its own. It sounds fresh, modern, but undeniably AC/DC. Real hard, classic rock - with just a tinge of blues thrown in for good measure. Wilfully basic rock, and that's how we like it.
The CD is also much like the 2003 remasters of AC/DC's albums, so aesthetically it fits in with the rest of your CDs, most likely. A sturdy digipack with nice picture-booklet and picture CD. Very pleased with this product. What an album. Just mind-blowing.
Leer más

Jimi Jac
4,0 de 5 estrellas Till Deaf do us Part
Revisado en Reino Unido el 15 de noviembre de 2020
Compra verificada
Wow, this is certainly a turn up for the books. With Johnson having to quit the band through loss of hearing & then having all contact with Angus & the AC/DC management cut off & being replaced by Axle Rose (it’s a shame there isn’t a live album from his tenure with the band, I image that’s down to Mr Rose), Rudd under house arrest for drug possession & attempting to hire a hit man (you could not make this up!), & Williams leaving because his felt the heart & soul had been ripped out of the band. A lot of fans would have thought that the curtain was finally coming down an a illustrious career.
But then Johnson gets a special hearing aid that allows his to hear the guitars & patches things up with Young The same things happens with Rudd & Williams after attending the funeral of George Young.
Produced once again by Brendan O’Brien (third time in all) who gives the band & good contemporary rock feel.
Once again the tracks are taken from the “Black Ice” sessions, with quite a good mix of song moods (for AC/DC that is, there’s no Jazz Fusion or Euro Techno,)but it's nice to hear them mix it up a little. The album has a more confident feel than “Rock or Bust”, I Imagine the shock of losing Malcolm was still in the fore-front of their minds when recording that album.
If I was going to offer an criticism it's that the record loses a little momentum during the latter part, but "Power Up" is still a strong album, it’s just a shame Angus couldn’t bring Brain back into the song writing fold (Johnson last contributed lyrics on the band 1988’s “Blow up your Video” album, he claimed that he’d stopped because he was going through a divorce), but if this is going to be their last album, obviously never say never with this band, then AC/DC are defiantly going out on a high.
Leer más
Informar de un abuso
Traducir reseña a Español
Ver todas las reseñas
Amazon Prime: envíos rápidos, GRATIS e ilimitados y mucho más
Los clientes de Amazon Prime disfrutan de Envío en 1 día GRATIS en dos millones de productos y Envío en 2 o 3 días en millones de productos más, Acceso a series y películas en Prime Video, incluyendo las series Amazon Originals, más de 2 millones de canciones y cientos de listas de reproducción sin publicidad con Prime Music, cientos de eBooks en Prime Reading, Acceso Prioritario a las Ofertas flash y Almacenamiento de fotos gratis e ilimitado en Amazon Drive.
> Más información