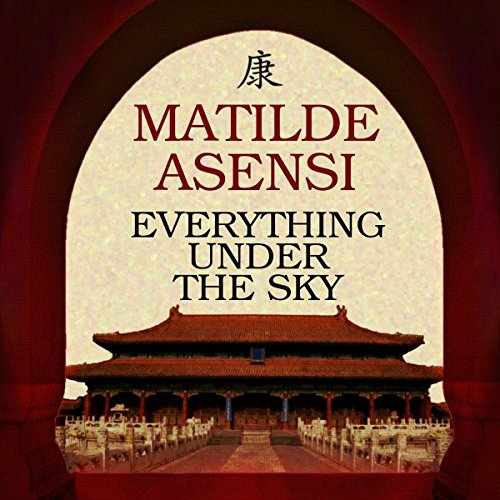 Everything Under the Sky

A great adventure in search of the First Emperor's treasure.

The book was second place for the International Latino Award. Over 1,000,000 copies sold worldwide by the so-called "Queen of the Spanish Adventure Fiction", one of the top writers in the Spanish language, and author of the best seller The Last Cato.

Set during the 1920s, Elvira De Poulain, a Spanish painter based in Paris, receives news that her estranged husband, now running the family textile business in China, has died in his house in Shanghai under strange circumstances and that she must make appropriate funeral arrangements. Accompanied by her niece, she leaves Marseille by boat to retrieve Rémy's body and claim her share of his worldly goods, unaware that this journey is the beginning of a compelling quest through China in search of the First Emperor's treasure.

After an eventful voyage, they finally arrive, and Elvira and Fernanda soon find themselves immersed in an underworld of gangsters, opium dens, and political intrigues.

The book has been successfully published in seven countries: US, Italy, Brazil, Holland, Greece, Romania, and Portugal.

Diane von Kesmark
5,0 de 5 estrellas I am so glad that I read this book
Revisado en Reino Unido el 27 de noviembre de 2014
Compra verificada
This very long book was well worth reading. The story begins in Southern France in the 1930s. Elvira's husband, who was working in China, has died, and so Elvira must go out and settle his affairs and sell the house he had bought there. Elvira takes her niece with her. On reaching the house in China, Elvira finds that her husband has left her nothing but debts due to his gambling, drinking and opium smoking. However, all is not lost. After visiting a monastery to seek solace and advice, the two women set out, with a monk to guide them, to find the tomb of the last emperor. There is a chance that she will find some of her husbands stolen riches there.
The author's ability to describe the Chinese terrain,it's people and the covert activities of the opium sellers is commendable. I am so glad that I read this book.
Leer más
Informar de un abuso
Traducir reseña a Español

mzb
3,0 de 5 estrellas Chinese History Lesson
Revisado en Reino Unido el 24 de marzo de 2015
Compra verificada
Enjoyed this book for bringing alive China's history in an easy to read and accessible way. Thought the story could have been bought to life much more if some chapters were written as seen through the eyes of the other characters as well. The political intrigue and drama would have played well in the background rather than just suddenly being sprung upon the reader and quickly dismissed. I understand the period setting but was still was not over comfortable with the grave robbing by the main character's and it made them slightly harder to emphasize with at the end, but this more a problem with looking at things in a different way nowadays rather than an issue with the book. I would recommend it as a great read to anyone interested in learning the history and culture of a country. It was certainly well researched, just a bit lacking in ambition, it could have been so much more.
Leer más
Informar de un abuso
Traducir reseña a Español

hanna el manzalaoui
5,0 de 5 estrellas Very good
Revisado en Reino Unido el 19 de octubre de 2013
Compra verificada
The lady who wrote this store did do a lot of research even down to what is not to found in the ordinary libraries. The fact that it is a Spanish out cast of the family is the main persons, which we only can guess is closely to the heart of the author
Leer más
Informar de un abuso
Traducir reseña a Español