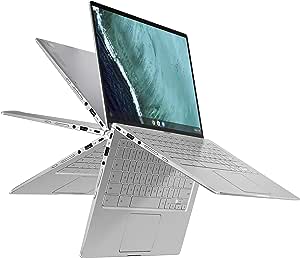 Justin W.
3,0 de 5 estrellas Nice build quality, but extremely buggy
Revisado en Canadá el 19 de julio de 2019
Compra verificada
I was really looking forward to this Chromebook when it was first announced back at CES, but due to some glaring issues explained below, I ultimately returned it.

First off, it is as others have mentioned, a lot heavier than it looks. At 3.1lbs, it's a good half pound heavier than my wife's Zenbook from 2015. It's a little thicker than I anticipated, though I suspect that's to support the various ways you can prop the device up. The weight made tablet mode unwieldy so I didn't use it often. Overall the build quality felt rather premium.

The screen was fantastic. The 14 inch display is probably the stand out feature. Watching media is a joy with it's 16:9 aspect ratio. Viewing angles were excellent and I had no problems with display brightness or colour accuracy. The one major issue I did have and one of the reasons I ultimately returned it was due to a horizontal 'screen flicker' that occurred when scrolling through a webpage. The 'flicker' took up about an inch of the screen and would show my wallpaper background. It would happen for a split second, but it was enough to drive me a little nuts as I couldn't reproduce the problem. This happened even when scrolling in portrait view in tablet mode. I couldn't tell if it was a hardware issue or a software issue, but doing some searching, it appears others face the same problem. I can say the issue persisted in V74, V75 and V76 dev channel (the last version ultimately broke the way Android apps worked, so that was unacceptable to begin with).

Keyboard and trackpad were fine. There was enough key travel that typing was not an issue, but the left 'Ctrl' key was not properly installed, so it kept sticking. I eventually fixed it, but I shouldn't have had to deal with that on a brand new device. As others have mentioned, the keyboard can be a little hard to read, especially with the backlight on in a well lit room. Turning off the backlight made it better, but I wish they stuck with black keys and white lettering for better contrast. Speaking of the backlight, it didn't feel even as some spots were brighter than others. When turning the computer on initially, the backlight would flicker as well (resolved by adjusting brightness - but again, I shouldn't need to do that).
The trackpad is plastic, so it's not smooth to the touch as glass would be. It was acceptable, but at times it would register a click when I lifted my finger which got annoying. Another bug I ran into was when waking from sleep, sometimes the mouse cursor disappeared and I was forced to use the touchscreen as the trackpad became inoperable. I had to either restart or flip it into a different mode then back again which suggested it was probably a software issue.

Speaking of the touchscreen, again, it was fine but animations were not as smooth as say on an iPad. Scrolling lead to some jelly effects that wasn't particularly pleasant to the eye. Using this as a tablet was not the best experience, sadly.

Last thing I'll mention is the speakers. They're down-firing and I didn't find they got particularly loud. It sounded a little 'tinny' lacking any sort of bass and really only usable when working on a flat surface. Trying to listen to something with the laptop on my lap was difficult. Since they're down-firing speakers they get covered when in tablet mode so they became useless. Only tent/stand mode made it acceptable.

I'm disappointed I came across so many issues/bugs with this device. I really wanted to love it, but not knowing if the issues would be fixed by a software update, or if I got a defective device, ultimately lead me to return it. It's a shame as this device is being touted as the successor to the C302 but I don't think it's there yet. I would consider the C302 instead, but updates are only guaranteed until 2022 whereas this one would be updated until 2024, as it goes with Chromebooks. I may consider purchasing this again if the issues are worked out, but until then I'll probably consider the next iteration.

I love this chromebook and it's exactly what I needed! The keyboard backlighting may be the only down side I have to mention but if you're comfortable with typing without looking at the keys, you won't have much trouble.

Battery life and screen are the major selling points. It's hard to describe the impact of having such thin bezels until you boot it up and see for yourself.

Some say it's a bit expensive, but the aluminum body makes this feel like a very high quality laptop. Like anything else, you have to do your research beforehand. If you don't want aluminum, look for another laptop, but for me, this was everything I expected and more.

Don't take my word for it though, look up more reviews online and do more research before deciding. I did, and I'm not dissapointed with my purchase at all.
Leer más
A 31 personas les ha parecido esto útil
Informar de un abuso
Traducir reseña a Español

Sankalp David
2,0 de 5 estrellas ChromeOS Sucks
Revisado en Canadá el 9 de junio de 2019
Compra verificada
The chromebook sucks. Getting one error after other while trying to use youtube and netflix apps. Tried to powerwash the device couple of times and reinstalling the apps again and again. Tried talking to the netflix customer care but no solution found. Though the build quality and the device seems nice, ChromeOS sucks
Leer más

2,0 de 5 estrellas ChromeOS Sucks
Revisado en Canadá el 9 de junio de 2019
The chromebook sucks. Getting one error after other while trying to use youtube and netflix apps. Tried to powerwash the device couple of times and reinstalling the apps again and again. Tried talking to the netflix customer care but no solution found. Though the build quality and the device seems nice, ChromeOS sucks
Imágenes de esta reseña

RMigs
5,0 de 5 estrellas A great Chromebook!
Revisado en los Estados Unidos el 9 de abril de 2019
Compra verificada
I waited for 3 months for this beauty to become available after the CES 2019.
As soon as it became available I ordered it. I wanted to compare it to my Pixelbook. (At twice the price or more). One of them could stay and one would have to go.

Update: after more testing and comparison, I did the PB and decided to keep the C434!
The C434 is a beautiful piece of hardware. Its aluminum finish is perfect.
The screen is excellent compared to the Pixelbook it is not quite as bright and brilliant but very close.
This is a widescreen versus the 3:4 on the PB. Looks good, better for movies, a bit awkward for use as a tablet.
The keyboard is excellent. I'd call it a tie with the PB.
Backlighting on the keyboard is good but n daylight it's better to turn it off as the letters on the keys are very hard to read.
Trackpad smooth, again a tie.
Weight goes to the Pixelbook which is about a pound lighter.
Storage, even though the Asus has a micro sd card slot, the PB with 128 or 256 gb of internal storage gets the nod. Chrome seems to deal with internal storage more easily than the external card.
Sound very nice for a laptop. Much better than the PB.
Ports, they both have 2 USB C but the Asus adds a USB A 3.0. Advantage Asus.
It was a very close call, but I decided to keep the PB for a while longer. I bet I'll order the Asus within the next year though. Maybe with a larger HD and a faster processor when available.