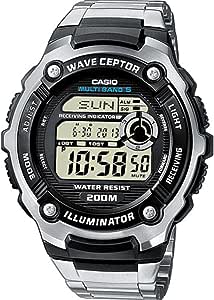 Sodbury Sofalover
3,0 de 5 estrellas A smarter, cheaper version of a G-Shock - though has reliability issues
Revisado en Reino Unido el 22 de octubre de 2014
Compra verificada
Very pleased with this watch. On a par with my (more expensive) G-Shock, and looks a bit smarter, so better for day-to-day wear. Quite a large / heavy watch, but that's only really a negative if you have skinny arms. Feels just as tough as a G-Shock (time will tell). Waveceptor (radio-controlled time) functionality is very useful - I had it on a previous watch, and it became a must-have for my next one. Only negatives are the need to get the bracelet altered (possible to do yourself with a few basic tools, but a bit fiddly - have a look for online videos / instructions), some odd decisions on the button placement (the light button is where you'd expect the stopwatch split / reset to be), and only having a single alarm (my G-Shock had four, which I found very useful).

Definitely recommended. If I lose this one, I'll be getting another.

EDIT: one year on, and the watch started malfunctioning - it would randomly reset the time and date to default values when I used the stopwatch. Searching a few internet forums suggested this was a fairly common issue. Replaced by Amazon under warranty (though it took a few E-mails to convince them to do this), and the replacement has had no problems so far, but worth noting, and I've dropped a star from my review as a result. My G-shock has had no issues after 5 years, for comparison.

EDIT 2: the replacement has just failed in exactly the same way as the first, after 18 months' use. Clearly there's a design issue with this model, so although I really like the design, I couldn't recommend it if (like me) you expect to get several years' wear out of your watches.
Leer más
A 7 personas les ha parecido esto útil
Informar de un abuso
Traducir reseña a Español

The Good
• The watch looks nice, has a clear screen and is just the right weight.
• Set-up is pretty easy and I only needed to look at the instructions a couple of times before I mastered the functions. Once the home city is set the watch automatically updates via radio every night with the tower and corrects the time if it needs to. It is easy to check that this has happened as it records when the update occurred.
• I really like the fact that you can have the day of the week on the screen as well as change around the MM/DD/YYYY to DD/MM/YYYY. This means it suits european needs as well as American.
• The watch also has various timer, alarm and stopwatch functions, but as I don't use them often did test them much. The timer I did use and although it's a bit awkward to set the time you require, once set works as it should.
• Another nifty feature is the ability to set another world time that can be accessed by pressing one button.
• Finlly, the watch is water resistant to 200m so can be worn in the shower and when swimming.

The Bad
• Depending on how tight you wear your wristwatch I found the a number of times while doing manual work that the "Mode" button was accidentally pressed, changing what was displayed. This does not happen often, but enough times to be a little annoying.
• The main negative feature about this watch is the Indiglo feature. If you don't require the time in the dark (or at night), then you can skip this section of my review. The indiglo feature worked well for 6 months and then failed. Refusing to come on when the button was pressed or flickering on and then not coming on again. I received an exchange watch in June and as of this writing (November), the second watch is now having the same problem. This would lead me to believe it is a manufacturer flaw.

Why 2 Stars?
I purchased the watch because I do require it to work at night. Because the watch failed on this issue for which I bought it I have to rate it so low.
Leer más
A 3 personas les ha parecido esto útil
Informar de un abuso
Traducir reseña a Español

John Malcolm
5,0 de 5 estrellas A good watch for telling the time, not so for posing
Revisado en Reino Unido el 25 de agosto de 2015
Compra verificada
Well, one of the main things I really like - and this should happen on ALL digital watches, not just the select few - is the ability to reverse the date, so it appears in a format normal for us Europeans. It's surely just a simple switch in software, and yet we've had to put up with nonsense like (today's date for instance) 8/22/15 for years, instead of 22/8/15, which is how the British and other Europeans write dates without thinking. [Edit: photo, proving that a digital watch CAN show dates correctly, added 22nd Aug 2018; plus the original battery also still going fine since purchase, but then again I don't use the alarm or the light.]

Anyway, rant over, I've been using Casio watches since the early 80s, and in a way it's been a search for the perfect watch. I've had Seikos, but found their digital watches in the 80s didn't last - buttons fell out - so I've stuck with Casio. This watch is pretty much perfect, apart from the slightly small number size for the date, and why is the big dial for reception details quite SO big?

Now I've got the links taken out so it fits my wrist snugly, the metal strap makes the watch almost impossible to steal off my wrist without me noticing - it only just fits over my hand when putting it on as it is. Also, I approve of the toughened glass, and the slightly raised bumps around the display which make it even harder for the glass to get damaged - I'm a bit of a clumsy so-and-so, and swing my arm when going through doorways, resulting in (occasionally) banging my wrist/watch against the frame. Still, that's me, not the watch's fault, but it's nice to see the extra protection for the screen, even if it does make the watch a little bulkier.

Accuracy, of course, is paramount, and thanks to the Wave Ceptor technology it is pretty good(!) This is a tough watch for simply telling the time with, not some fancy many-hundreds-of-pounds dress watch for showing off how much money you have - posing, in other words. OK, so I'll never go scuba diving, but it's nice to have the 200 metre waterproofing, just in case - although having to renew the seals after every three (or so) years is a pain.

So, not (yet) the perfect watch for me, but it's getting there.

Edit: Oct 2015 Unfortunately I've had to stop wearing this watch because of my left wrist showing arthritis-like symptoms, making it painful to wear. Part of the problem is simply the metal strap and the weight of the main case. So I've switched to a much lighter Casio watch, which is gentler on my inflamed and sensitive wrist. However, if the arthritis/whatever-it-is goes away I will happily be wearing my WV-200DE again. Here's hoping...

Edit Oct 2019 Still happily chugging along on original battery (see photo: pic not great due to camera in tablet). Watch is mainly a second watch; by that I mean it's used where there may be bumps and/or in busy public places, where its lack of expensive glamour, its non-Rolex name and the over-the-hand strap work in it being unlikely to be nicked! Despite photo it's still as clear as ever and syncs every night. A great working watch and as it is only used occasionally there are no more wrist pain issues - which was my wrist's fault not the watch. I still think the receive segments are too big and could be reduced to make the date disply a bit bigger, but it's too late to complain now...
Leer más

A. Dekker
3,0 de 5 estrellas Flawed, but still my favourite watch
Revisado en Reino Unido el 30 de agosto de 2014
Compra verificada
Really want to give this more stars but unfortunately it has a nasty habit of resetting itself completely, twice whilst using the countdown timer [ie, when I was actually depending on the watch].

Other than that, it's well enough built, although not 100% metal. I'd love to see a version where the black plastic is replaced with black metal. The clasp is very secure and I've never had it come open unbidden, unlike my Fossil.

Harry
5,0 de 5 estrellas Excellent value for money
Revisado en Reino Unido el 14 de enero de 2012
Compra verificada
Just received this watch yesterday. It has a solid feel to it, its easy to set up the time, alarms etc without reading the mini instructions book that comes with it. Adjusting the straps was easy enough to do once I had worked out what I had to do really no need to pay jewellers to do it. How to - You will need a small flat screw driver(like what you would use to tighten glasses)and a pair of needle nose pliers. All you have to do is put the screw driver by the arrow in the middle catching the flat clip and push once the clip slides out a bit use the pliers to pull clip out all the way.
Remove as may links as you need to once to right size place a clip back to reassemble gently use pliers to push the clip all the way back in. If anyone needs further instructions or pics on how to just leave a comment.
Leer más
A 8 personas les ha parecido esto útil
Informar de un abuso
Traducir reseña a Español
Ver todas las reseñas
¿Desea descubrir más productos? Visite esta página para ver más: casio wave ceptor
Amazon Prime: envíos rápidos, GRATIS e ilimitados y mucho más
Los clientes de Amazon Prime disfrutan de Envío en 1 día GRATIS en dos millones de productos y Envío en 2 o 3 días en millones de productos más, Acceso a series y películas en Prime Video, incluyendo las series Amazon Originals, más de 2 millones de canciones y cientos de listas de reproducción sin publicidad con Prime Music, cientos de eBooks en Prime Reading, Acceso Prioritario a las Ofertas flash y Almacenamiento de fotos gratis e ilimitado en Amazon Drive.
> Más información