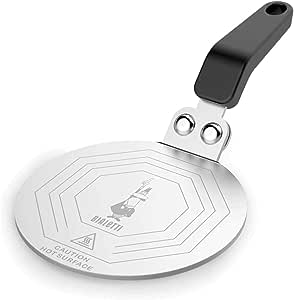 Orchid Master
3,0 de 5 estrellas It's ok, but a quick hack will make it much more efficient
Revisado en Reino Unido el 7 de septiembre de 2020
Compra verificada
This works ok, but all of these induction converters that i have seen are poorly designed. If you buy one, a simple trick will improve it considerably, but if you can find one where they makers has incorporated this into the design, it will be much better.

The problem is that the heat transfer goes down as well as up, making the cooker overheat rather than the pan.

The easiest trick is to put a piece of paper kitchen roll underneath it (so not the expensive stuff, because that contains plastic which will melt). Slightly more convoluted, but much better, is below.

To decrease the insulation above it, it could have a top layer of copper, which would transfer the heat better to the pan sitting on it. I have not worked out an inexpensive way to do that, but an induction disk with that will be significantly better.

The paper insulates the disk from the cooker quite well, but the air insulates it even better, so if you remove the bottom flat layer of paper, there's even less contact between disk and cooker, and the insulation is even better.

This simple hack makes the induction disk work significantly better - but even better would be a disk that had this insulation gradient built into it, surely not beyond the wit of man.