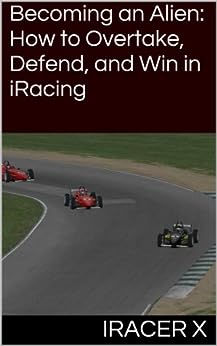 Becoming an Alien: How to Overtake, Defend, and Win in iRacing (English Edition) Versión Kindle

Client Kindle
5,0 de 5 estrellas Nice book
Revisado en Francia 🇫🇷 el8 de agosto de 2016
Compra verificada
To keep in mind or explain basics of simracing. Very helpfull in my case as I am not consistent enough during a race
Thank you iRacer X

H. J. Grunenwald
3,0 de 5 estrellas A decent story in need of an Editor, and the Kindle version needs a Copy Editor
Revisado en los Estados Unidos 🇺🇸 el 8 de noviembre de 2019
Compra verificada
I'm writing this review of Rebecca Ore's work as a single review, but covering the first two books of this series, "Becoming Alien" and "Being Alien", as the reviews of each would be similar, with the latter book mainly suffering by degree.

I first came across "Becoming Alien" in a used bookstore in my hometown in the mid-90's. I found the Title and cover image intriguing, and for $0.99, was an easy purchase. I recently purchased Becoming and Being on Kindle, and it is that edition that I am reviewing now. I will review these products in terms of the story, and the Kindle Edition (which I assume for the author's sake that she had nothing to do with.)

On the positive, I have a soft spot in my heart for Becoming. It is an entertaining story about an outcast being thrust into a completely isolating (a.k.a. "alien") society. Due to the story beats, the protagonist undergoes a standard procedure after which the language centers of his brain are reset, so as to be able to learn the common Federation (a multi-species and multi-type coalition) language, as well as to relearn English. I also enjoyed how there are nuances to the speech of Karst that make some statements of language intent explicit rather than open to context or interpretation.

On the negatives, story-wise, the author needed an editor. She very plainly did not have one.

An editor would have pointed out statements that were confusing or ambiguous. This is more a problem in the second book than the first, but there are more than a handful of instances in Becoming where a paragraph is difficult to parse because it isn't clear who is doing what to whom, or to what an individual is referring to.

An editor also would have pointed out that when using made-up words and concepts (from another languages), they need to be stated more than EXACTLY ONCE. If you are going to introduce a new concept with it's own linguistics, it needs to be reinforced if you have left the topic and come back. Both books are guilty of this, with Being the worse offender.

Likewise, even with English words, what they imply and their role in society must be explained. If I use the word "Priest", that can have drastically and distinctly different meanings, implications, and importance depending on a great many contexts. Even if I were to use them in reference to Boston, Massachusets or San Francisco, California, their importance and implications could vary widely! In these books, the words "Refugee", "Rector" and "Sub-Rector", "Institute", "Academy", and others are NEVER explained. (If they are, I missed them because of the previous point, but I'm fairly certain they've never been explained.) An Editor might have pointed that out.

Like the definitions, descriptions are very sparce. A strong secondary character, the "Rector" (whatever that means) is only described as basically an eight foot tall Sesame Street's Big Bird, but with grey feather. Aside from one race of near-humans who have "round jaws", this is probably the most coherent description of a non-human given in the pair of books. Only reinforced slightly more than the made-up words of other languages, only small pieces of an individual are described at any one time. Gwyngs, creatures descended from a Terran bat-like species, are described the best and most often, and even they have not been adequately described so as to create a coherent picture in the mind.

Even if the author's universe limited terrestrial intelligent life to be limited to a few templates - bat-descendants, bear-likes, cow-like, ape/brachiator-descendants, and bird-like creatures, to the complete exclusion of insectoids or reptiloids, never mind anything else - the descriptions are severely lacking.

Story-wise, I enjoyed Becoming, but found Being to be rather lackluster. I don't intend to read the third book in the series.

Now I'm going to cover the Kindle version of the books. I don't expect that Mz. Ore had anything to do with these, unless she had no respect for her previous work. Whomever submitted these to Amazon for publication certainly didn't.

Where the stories needed an Editor, the product sold on Amazon's Kindle Store needed only a Copy Editor. These editions suck. I would lay down money to state that someone took a print copy of the books, ran them through a scanner with some OCR, made sure that the first and last pages were produced, and called it a day.

Further, the camera started out dusty on the first book, and got worse by the second.

Kindle and other ebook formats include niceties such as chapter headings. That was not used here. There are clear chapter numbers in the books, but as far as the Kindle software is concerned, the book consists of a single chapter, which has some page breaks followed by some blank newlines, a number that is centered, more newlines, and then normal text. If you like to use the "minutes left in chapter" feature of almost every other ebook, you will be stymied here. As far as Kindle is concerned, the book is a single chapter.

As I said earlier, this ebook was never reviewed for content. The scanner finished, OCR did it's thing, and some intern saw that the first and last pages were there. What they missed are:

- An amazing amount of missing and extra quotation marks in random places. (Probably not random, but I'm not investing any more time in these books...) I'll remind you that punctuation (including spaces!) is an advanced feature of written language intended to make it easier to decipher what the text is trying to convey, such as what someone is saying versus what they are thinking silently.

- A smaller - but still amazing - amount of other missing punctuation, especially commas and periods.

- Plain OCR mishaps, most notably words being mangled by things such as the character "m" being replaced with "rn", and vice-versa, as well as with other character combinations. There is at least one instance where a character's name is spelled both incorrectly and correctly on the same page!

- In "Being Alien", there is a roughly 3 paragraph section that is REPEATED VERBATUM, OUT-OF-CONTEXT, a page or two after it was intended to be displayed. I thought I was having a psychotic break when I came across this.

In the end, "Becoming Alien" is an interesting story who's editing and copy-editing flaws make it a challenging but possibly worthwhile read if you are willing to suffer a bit. "Being Alien" is a mediocre story that is absolutely not worth the effort and frustration that it inflicts to get through it.